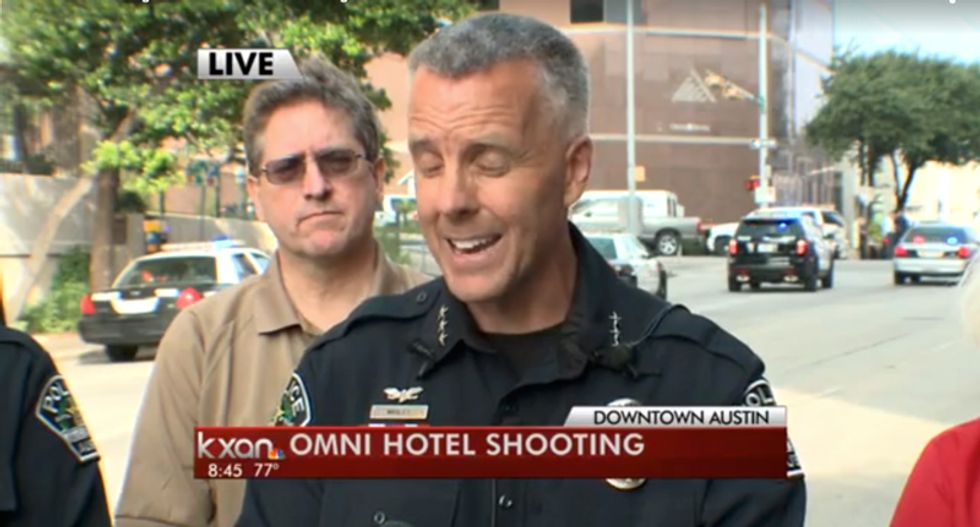 An early Sunday shootout in the lobby of a swank downtown Austin hotel ended when police killed a man after he apparently randomly gunned down another person, police said.

The shootings at the Omni Austin Hotel, about four blocks from the Texas state Capitol, happened just before 5 a.m. CDT, police said.

A 911 caller reported a man walking around with a gun in the lobby of the hotel, a sleek high-rise with a soaring atrium overlooking the city's historic Sixth Street district, said Assistant Police Chief Brian Manley.

Two minutes later, the caller reported that the man had just shot someone, he said.

"The 911 operator was able to hear crying in the background as well as yelling," Manley said.

Police arrived to find a man with a rifle and saw a body on the floor of the lobby, Manley said. The gunman pointed the rifle at officers, who then chased him while he fired several shots, including some at police, Manley said.

One of the officers, a five-year veteran with the department, shot and killed the gunman inside the lobby near the hotel restaurant, Manley said.

The officer has been placed on administrative leave, pending an internal investigation, Manley said.

The bar and the restaurant were closed when the shooting happened.

The names of the gunman and the person he killed near the lobby bar have not been released. There is no reason to believe they knew each other, Manley said.

"We don't have any information at this point that leads us to believe this was anything other than random, but again, we are in the early stages," Manley said.

In November, Austin police killed Larry McQuilliams after he had fired more 100 rounds into the Mexican Consulate, the courthouse, and other downtown buildings.

Watch a video report on the story below: