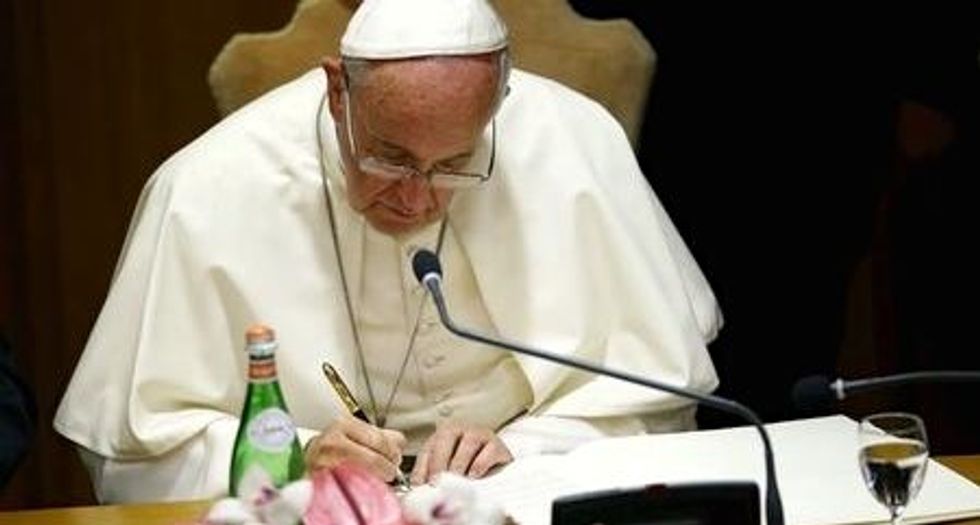 Pope Francis signs a declaration during the "Modern Slavery and Climate Change" conference at the Vatican July 21, 2015. REUTERS/Tony Gentile

Pope Francis' approval rating in the United States has dropped during the past year, according to a poll, with conservatives and Roman Catholics taking a cooler view of the pontiff after his strong warning on environmental crises and criticism of the excesses of capitalism.

The pope, who is due to visit the United States in September, is still warmly regarded by most Americans, with 59 percent telling the Gallup polling service they view him favorably. That figure is down from 76 percent a year ago but in line with his favorability rating shortly after he was elected to lead the 1.2 billion-member Roman Catholic Church in March 2013.

The pope's popularity fell the most among U.S. adults who identify as conservative, with just 45 percent saying they viewed the Argentine favorably in a poll conducted from July 8 to 12. That was down from 72 percent in February 2014.

Some 71 percent of U.S. Catholics polled said they approved of the pope, down from 89 percent a year earlier.

The decline comes as Francis has changed the focus of his public remarks from that of his immediate predecessors, concentrating less on the Church's opposition to abortion and gay marriage and spending more of his time discussing social inequity and poverty.

His environmental encyclical, "Laudato Si," the first papal pronouncement on climate change, received a lukewarm response from U.S. Republican presidential hopefuls, including former Florida Governor Jeb Bush and Senator Marco Rubio of Florida, both of whom are Catholic. Many in the party consider the science on whether humans are changing the environment unsettled.

"These poll numbers are not surprising and as a matter of fact you could even say there is an upside to them in the sense that it shows people are listening to the pope," said the Rev. James Bretzke, a professor of moral theology at Boston College. "They're not always agreeing with him but they are clearly listening."

Even with the decline, Francis remains more popular in the United States than his predecessor, Benedict, had been at any time during his eight-year papacy, according to Gallup.

The swing was unusually large for such a prominent figure, said Frank Newport, Gallup's editor in chief.

"It was a significant change, more so than we usually see for a figure like that," he said.