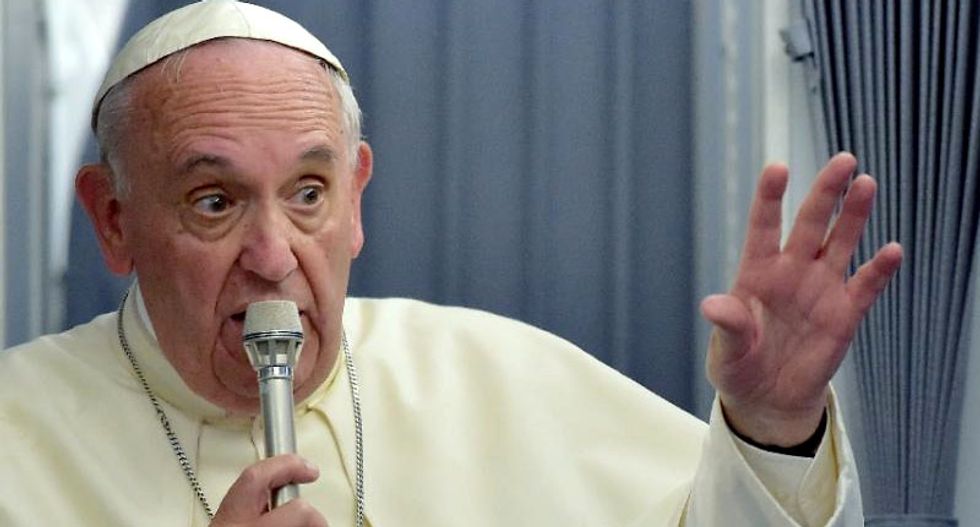 Pope Francis gestures to journalists during a press conference onboard a plane on his way back to Rome on July 13, 2015 (AFP Photo/Vincenzo Pinto)

Pope Francis on Monday joked that he did not have to "take drugs" when questioned by a journalist as to the secret of his energy during a whirlwind tour of three Latin American countries.

The 78-year-old pontiff delivered about two dozen speeches and said several masses during a weeklong trip to Ecuador, Bolivia and Paraguay.

"You would like to say that I take drugs!" he said in jest, speaking in the plane flying him back to Rome from Asuncion, Paraguay's capital.

"Mate is what helps me," he said, referring to a traditional caffeine-infused beverage popular in the pope's native land Argentina.

"I have never tried coca. That should be made clear," he said, smilingly after Bolivian authorities said they did not exclude him chewing coca leaves to deal with the altitude in La Paz, perched 3,600 metres (11,800 feet) above sea level.

Coca is native to western South America and is known throughout the world for its psychoactive alkaloid cocaine. Chewing the leaves or drinking coca tea does not produce the intense high people experience with cocaine.

The pope's visit, his ninth trip abroad, has been notable for a number of historical pronouncements.

The pontiff decried the scourge of corruption as the "gangrene of a people," railed against ideologies, called for an end to poverty and lamented today's consumerist society.