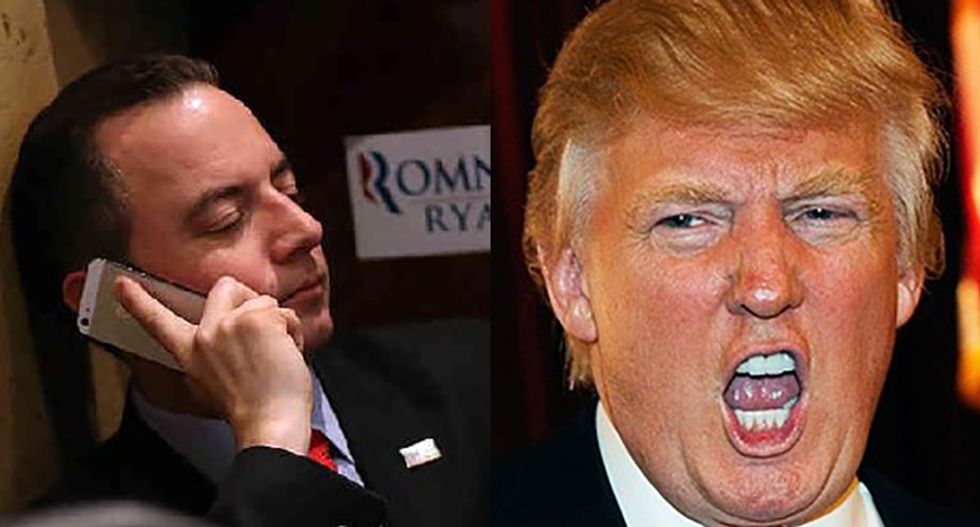 Republican National Committee head Reince Priebus reportedly called Donald Trump on Wednesday afternoon and asked him to please think more carefully about any future remarks he makes regarding the topic of immigration.

According to the Washington Post, Priebus discussed a range of topics with the billionaire and current GOP front-runner for 2016, but the overall thrust of the 45-minute conversation was that Trump is potentially damaging the GOP's appeal to young voters and Latinos with his increasingly outrageous and xenophobic remarks.

Republicans will need those two crucial voting blocs in upcoming elections and party officials are becoming increasingly worried about the message sent by Trump's bull-in-a-china-shop handling of racially sensitive subjects.

CNN's Dana Bash quoted some of Priebus' remarks from the call.

"Look, I've gotta tell you, I spent four years trying to make inroads with the Hispanic community," Priebus reportedly said. "(H)ow we address illegal immigration is very important," he went on, to luring those voters away from the Democratic Party.

RNC spokesman Sean Spicer told CNN, "They had a respectful discussion across a wide range of issues including illegal immigration."

The former reality TV personality and real estate mogul -- famously dubbed a "short-fingered vulgarian" by now-defunct Spy magazine -- caused an uproar with his campaign announcement speech, in which he called Latin immigrants "criminals" and "rapists."

Since then, dozens of companies and individuals associated with Trump and his various brands have rushed to distance themselves from his name.

In the face of the backlash, Trump has doubled down on his remarks, firing barbs at critics and taking a jab at 2016 Republican primary opponent Gov. Jeb Bush (R-FL), who is married to Columba Léon Bush, a native of Mexico.

"#JebBush has to like the Mexican Illegals because of his wife," tweeted Trump on Monday, a message he later deleted.

The former Florida governor told a reporter on Wednesday, "You can love the Mexican culture, you can love your Mexican-American wife and also believe that we need to control the border. This is a bizarre kind of idea that somehow you can have an affection for people in a different country and not think the rule of law should apply. This is ludicrous."