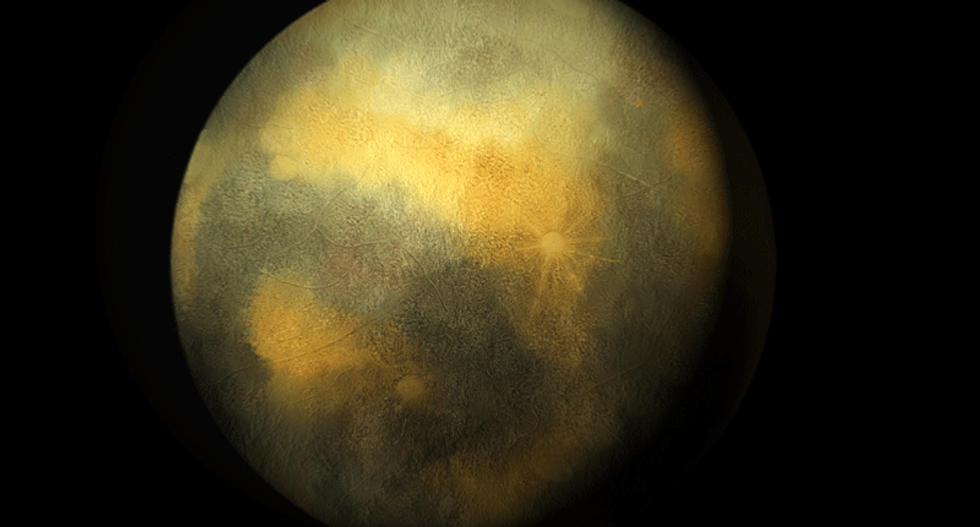 “We had no idea that Pluto would have a geologically young surface,” said lead researcher Alan Stern, with the Southwest Research Institute in Boulder, Colorado. “It’s a wonderful surprise.”

The goal of the $720 million New Horizons mission is to map the surfaces of Pluto and its primary moon Charon, assess what materials they contain and study Pluto’s atmosphere. Launched in 2006, the spacecraft traveled 3 billion miles (4.88 billion km) to fly through the Pluto system on Tuesday. About 1 percent of the 50 gigabytes of data recorded in the 10 days leading up to the close encounter with Pluto has been relayed back to Earth.

Still, the early results show that frozen Pluto, where surface temperatures reach 400 degrees below zero Fahrenheit (minus 240 Celsius), is challenging theories about how icy bodies can generate heat to reshape their surface features.

For example, a bright heart-shaped region near Pluto’s equator has no impact craters, indicating a surface that is less than about 100 million years old, a relative blink in geologic time.

“It’s possibly still being shaped this day by geological processes. Those could be only a week old, for all we know,” geologist Jeffrey Moore, with NASA’s Ames Research Center in Moffett Field, California, told reporters on a conference call.

A section of the plain is broken into 12- to 20 mile (19- to 32-km) wide polygon shapes that are boarded by shallow troughs, some of which are lined with dark material. Even more enigmatic are clusters of hills, or clumps that trace the shapes of the troughs and encircle the polygons.

“We suspect the hills may have been pushed up from underneath along the cracks,” Moore said.

Another possibility is that the plain is eroding around the hills, leaving behind mounds of a more resistant material.

“We don’t know which of those two explanations are correct,” Moore said.

The polygons could be evidence of convection in Pluto's icy face, similar to the surface of a boiling pot of oatmeal. The source of Pluto’s internal heat, if it exists, has not yet been determined.

The polygons also could be like mud cracks, created by contraction of the surface, Moore added.

“The landscape is just astoundingly amazing,” he said.