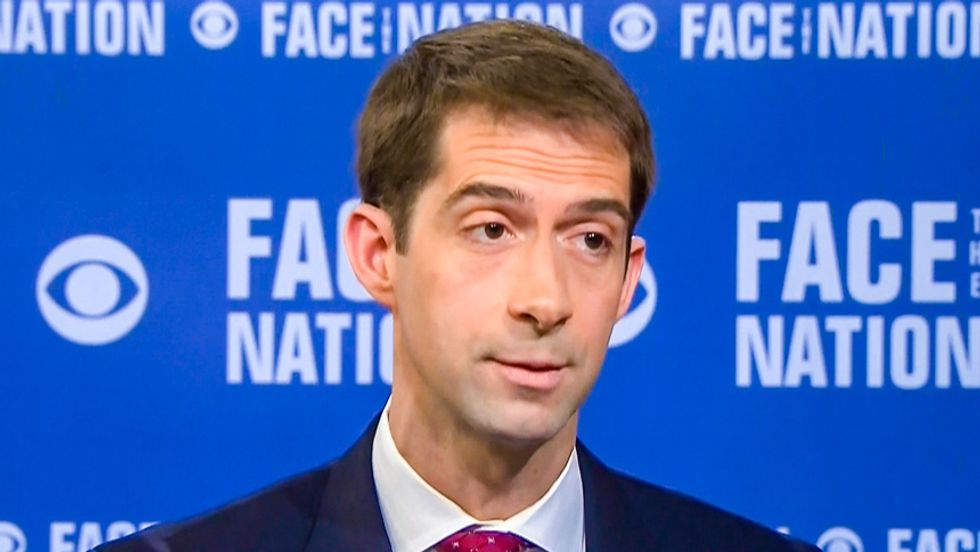 Despite pleas from the chief judge of the Court of Federal Claims to fill five vacancies on the court that oversees claims against the government, Arkansas Sen. Tom Cotton (R) is blocking confirmation votes for five Obama nominees, ensuring the court remains solidly pro-business.

According to Roll Call, Cotton has blocked the nominees saying the court doesn't need the additional justices despite a caseload 2,528 cases on its docket in 2014. Currently the court has eight Republicans appointees compared to only three appointed by Democrats, giving it a overwhelming conservative slant.

Cotton's old law firm, Cooper & Kirk, sells itself as a "go-to firm” for businesses suing the government in large cases and is currently representing several clients in cases before the court.  According to federal records, the firm's employees were large contributors to Cotton in 2012 and in 2014, making about one third of their total campaign contributions in 2014 to Cotton.

Voting and approving the five Obama appointees would create an 8 GOP appointee, 8 Democratic appointee balance that would not be in the best interests of the boutique law firm.

According to a representative from Public Citizen, Cotton's move has all the hallmarks of a conflict of interest.

“It certainly has an appearance of conflict of interest,” said Craig Holman. “If anyone knows the court is sufficiently staffed it would be the court itself.”

This is not the first time the first term senator has been accused of tailoring his comments to suit the views of  big time contributors.

The saber-rattling Republican -- who notoriously sent a threatening letter to the leaders of Iran -- has been the recipient of hundreds of thousands of dollars from groups allied with Israel, while meeting privately with defense contractors.

Trump is 'done' and 'I'm not sure he's going to escape jail': presidential historian

A history professor who has predicted every presidential election correctly since 1984 said that he believes former President Donald Trump is "done" in politics and may not escape jail time after he was sued in New York for alleged real estate fraud.

Speaking on Fox News this Wednesday, Donald Trump's daughter-in-law slammed New York Attorney General Leticia James for filing a civil suit against Trump and his businesses alleging that he enriched himself and his family by improperly inflating the value of his assets.

Also named in the suit are three of Trump's adult children, one of whom is Lara Trump's husband, Eric. During the Fox & Friends segment, Lara Trump mentioned James' probe into accusations that her husband funneled money from his cancer charity to his businesses -- alleging that James' inquiry possibly led to the deaths of children.

Christiane Amanpour has a history of interviewing the top leaders of the world, but on Wednesday evening Iranian President Ebrahim Raisi clashed with the CNN International anchor.

Visiting the United Nations with other world leaders this week, President Raisi was to speak with Amanpour, she said, amid the uprising back home. Posting about the incident, she said that it was going to be his first interview on U.S. soil.