Senate committee pushes to end US travel restrictions to Cuba 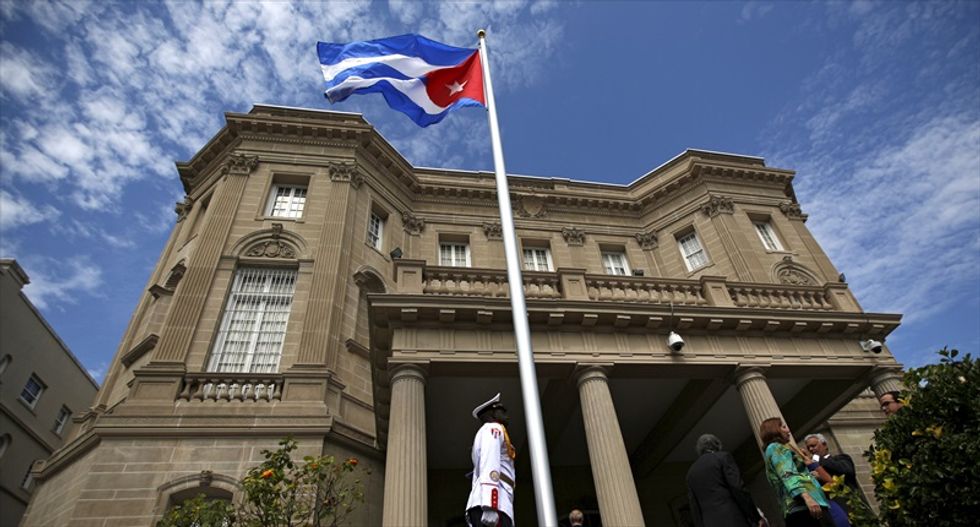 A guard stands in front of the new Cuban embassy in Washington after officials raised the national flag in a ceremony on July 20, 2015. Photo by Carlos Barria for Reuters.

A U.S. Senate committee on Thursday approved amendments that would end restrictions on travel by Americans to Cuba and ease some trade barriers, advancing efforts to implement President Barack Obama's rapprochement with the communist island.

By an 18-12 vote, the Republican-controlled Appropriations Committee backed a measure that would ease travel limits, making it the first legislation to pass any congressional committee to facilitate normalization of relations.

The committee later passed other amendments, by voice vote without objections, to a Financial Services appropriations bill to allow private financing for U.S. agricultural sales and lift restrictions on ships that call at Cuban ports.

Attaching the amendments to the appropriations bill boosts the likelihood they will come up for a vote in the full Senate. To become law, a version of the bill with the amendments must pass the House of Representatives.

"This is a first step by the Senate to dismantle a failed, discredited and counterproductive policy that in 54 years has failed to achieve any of its objectives,' said Democratic Senator Patrick Leahy, a long-time opponent of Cuba sanctions.

"These votes were not about the repugnant policies of the Castro regime, but about doing away with unwarranted impediments to travel and commerce imposed on Americans by our own government," he said.

Obama and Cuban President Raul Castro announced on Dec. 17 that they would move toward normal relations between the former Cold War foes for the first time in half a century. Cuba opened its embassy in Washington on Monday.

The policy faces strong opposition in the Republican-majority Congress. The half-century-old U.S. trade embargo remains in place and only Congress can lift it.

The measures were passed a day after a closed-door meeting at the White House with dozens of Cuban Americans and academics and business leaders with an interest in Cuba who support Obama's policy of engagement.

U.S. officials told the group that the administration has no plans to announce new measures regarding Cuba and is still refining regulations announced in January to ease travel rules and financial and banking changes.

"The administration feels they have gone as far as they can right now," said one person who attended. "They want to broaden the base of stakeholders ... create the space for others, including Republican members of Congress, to take steps."

(Reporting by Patricia Zengerle, additional reporting by Idrees Ali and Matt Spetalnick in Washington and David Adams in Miami; Editing by Dan Grebler and Steve Orlofsky)