'Shut the f*ck up or I will break your f*cking neck': Dallas cop threatens teen after mistaken 911 call 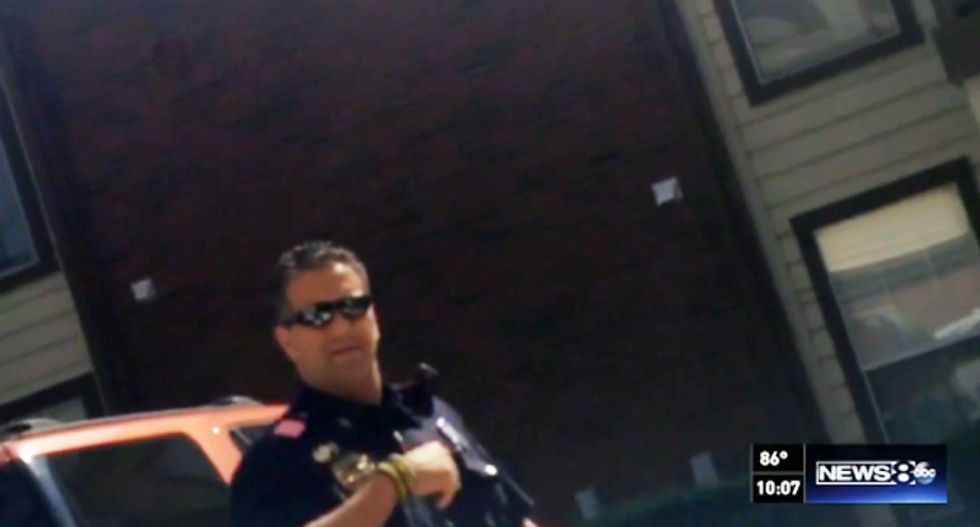 A Dallas police officer received a three-day suspension after putting his arm around a 14-year-old teen and telling him "I will break your f*cking neck," WFAA reports.

The altercation -- which took place last October and was recorded by the teen without the officer's knowledge -- came after officer Terigi Ross and his partner responded to a 911 call that ended in a hangup.

According to authorities, the teen's stepmother made the call over a towed car and then hung up thinking the conversation was over.

After speaking with the woman, Rossi decided to handcuff her and told her she was being arrested.

When confronted by the teen over why she was being arrested, Rossi grew angry and began threatening the teen, telling him he was going to end up in a foster home before launching into an expletive-filled rant.

After telling the teen, "So you want to lie to me, too? Look at me when you talk to me. OK, be a man," the young man asked him take his sunglasses off.

That is when Rossi went off.

"If I were you, son, I'd shut the f*ck up, cause I'll break your f*cking neck. You understand me?" Rossi said before telling the teen that he was under arrest.

After he pulled away from the aggressive cop, telling him not to touch him, Rossi menaced him again, saying, "I'm telling you right now, Get the f*ck over here! Listen to me! You're just like your mother. You're a piece of f*cking sh*t. You little [expletive]," at which point the boy began to cry.

According to the teen, Rossi grabbed around the neck and shoulders, however Rossi wrote in his report that he only put his arm around teen to "console" him; an account that was not backed up by his partner.

Despite all the threats, no one was arrested that day after a supervisor showed up and saw no reason to take anyone into custody, however the boy turned his video over to authorities leading to Rossi's suspension.

Rossi, who was previously a member of the Dallas SWAT team before being busted down to patrol after he was caught sleeping on the job, authorized his union rep to say that he knew he made a mistake admitting "The kid got under his skin."

Watch the video below from WFAA: