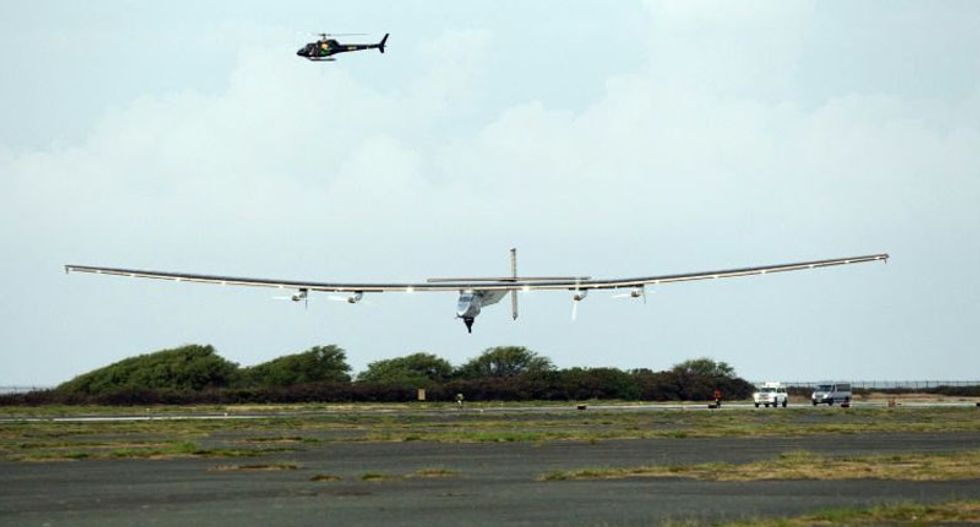 The Solar Impulse 2 aircraft completed an historic flight Friday after circling the globe without so much as a drop of fuel, then touching down seemingly effortlessly in Hawaii.

The experimental plane touched down in Hawaii shortly after dawn -- a little after 1600 GMT -- amid cheers and applause from the ground crew. Borschberg, all smiles, emerged a short time time later from the cockpit.

Sunlight glimmered on the horizon as the Solar Impulse ground crew burst into cheers and applause upon completion of the groundbreaking flight.

"The #solarteam made it. WE MADE IT, YOU MADE IT THANKS TO YOUR SUPPORT!"read a message posted under the Twitter handle @solarimpulse.

The aircraft over the course of the journey set records for longest solo flight and most time in a solar-powered flight.

The flight tested its exhausted pilot to the limit, in what his team described as "difficult" conditions. Mission organizers described the journey as having taken "pilot and aircraft to the limits" of their endurance.

The whole trip from Japan to Hawaii took about four days and 22 hours, with the Swiss aviator taking catnaps of only 20 minutes at a time to maintain control of the pioneering plane.

Borschberg easily beat the previous longest solo endurance flight by Steve Fossett, who flew for 76 hours and 45 minutes in 2006.

Fellow pioneering aviator and rival Richard Branson tweeted his congratulations to Borschberg just before his competitor touched down.

Alone throughout the entire flight and utterly self-reliant in the unpressurized cockpit, Borschberg was equipped with a parachute and life raft, in case he needed to ditch in the Pacific.

The solar-powered aircraft left Japan around 1800 GMT Sunday -- the early hours of Monday local time -- after spending a month in the central city of Nagoya.

The propeller-driven plane was originally scheduled to fly directly from Nanjing in China to Hawaii, but bad weather along the way forced a diversion to Japan that stretched to a month.

Traveling at altitudes of more than 9,000 meters (29,500 feet), Borschberg had to use oxygen tanks to breathe and experienced huge swings in temperature throughout the day.

Solar Impulse 2 set off from Abu Dhabi earlier this year in a multi-leg attempt to fly around the world without a single drop of fuel.

It has 17,000 solar cells and on-board rechargeable lithium batteries, allowing it to fly through the night.

Its wingspan is longer than that of a jumbo jet but it weighs only 2.3 tonnes -- about the same as a car.