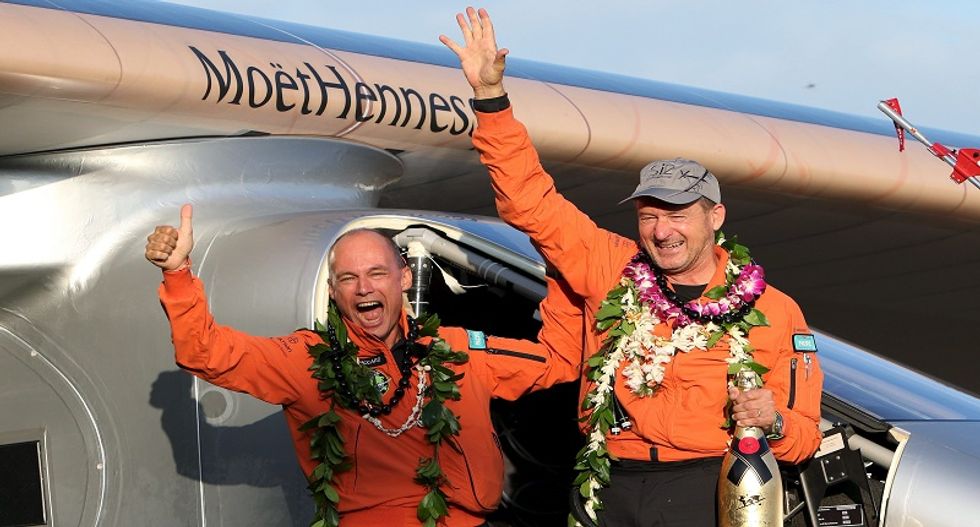 A Swiss man attempting to circumnavigate the globe with an aircraft powered only by the sun's energy landed in Hawaii on Friday, after a record-breaking five-day nonstop solo flight across the Pacific Ocean from Japan.

The Solar Impulse 2 is the first aircraft to fly day and night without any fuel. Pilot Andre Borschberg's 120-hour voyage shattered the 76-hour record for nonstop flight by late American adventurer Steve Fossett in 2006 on the Virgin Atlantic Global Flyer.

Borschberg, who took off from Nagoya, Japan, on Monday on the seventh leg of the journey, landed at 5:55 a.m.(1155 EDT) on Friday in Kalaeloa after five days and nights.

The aircraft, piloted alternatively by Swiss explorers Borschberg and Bertrand Piccard, set off on its 22,000-mile (35,000-km) journey around the world from Abu Dhabi on March 9.

The next leg would be from Honolulu to Phoenix, Arizona, and then Borschberg and Piccard will fly together across the Atlantic on a return path to Abu Dhabi.

Borschberg navigates alone in an unheated and unpressurized cockpit, sleeping in bursts of 20 minutes while on autopilot.

Addressing the pilot on a live online broadcast from the Solar Impulse Mission Control Center in Monaco, an ecstatic Peter Frei, head of the project's conceptual design and aerodynamics, congratulated the team on 12 years of work culminating in what he called a historic moment.

"Andre, what you did is unbelievable," Frei said. "I can't even imagine what it takes to be five days up there, with so little sleep and such a complex and crippled aircraft."

Studies, design and construction took 12 years and a first version of the plane rolled out in 2009 and broke records for heights and distances traveled by a manned solar plane.

The plane was created in order to encourage governments to replace pollutants with clean technology.

"Our airplane has not been built to carry passengers but to convey a message," says Piccard.