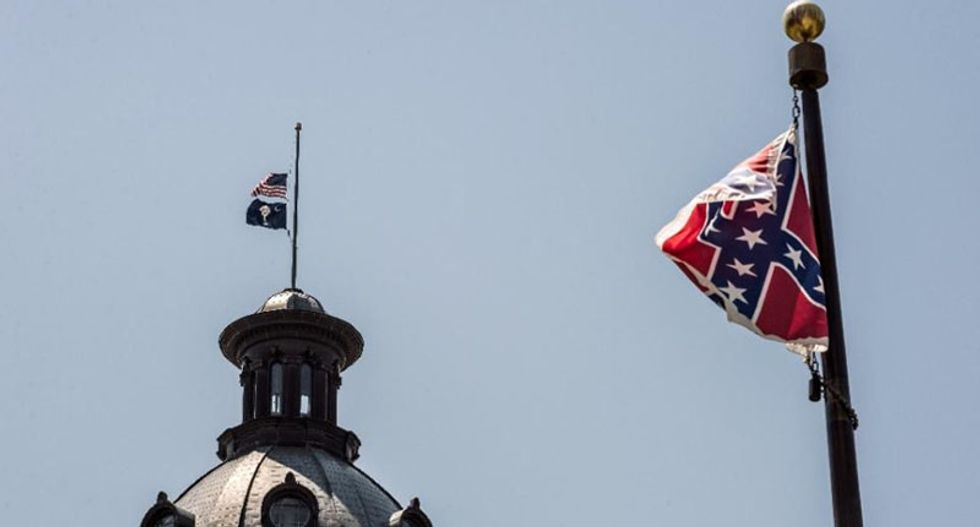 South Carolina lawmakers took a major step on Monday toward passing legislation to remove the Confederate battle flag that flies at the state capitol in Columbia and has long been denounced by critics as a symbol of slavery.

A bill to remove the flag from the state grounds passed a crucial second reading by an overwhelming vote of 37-3 after an emotional debate in the state Senate.

It faces a final reading on Tuesday before it is taken up by the lower House of Representatives.

The political discussion comes after numerous elected officials, including Republican Governor Nikki Haley, called for the flag's removal after the June 17 massacre of nine African-American churchgoers at Emanuel African Methodist Episcopal church in Charleston. Politicians and businesses across the southern United States are trying to banish the Confederate flag in response to killings of the church's "Emanuel 9" during Bible study. Photos of the white man charged in the shooting showed him posing with the flag on a website that also carried a racist manifesto.

Among the victims was the church's pastor, Reverend Clementa Pinckney, who was also a state senator, and his senate desk was draped in black.

The flag's defenders argue that it is worthy of recognition as part of South Carolina's heritage, representing the sacrifice of lives on the battlefield during the Civil War. They also worry that bringing down the flag, which has flown for more than 50 years at the capitol, could lead to calls for removing symbols from other monuments and changing street and place names honoring Confederate leaders.

The removal legislation appears to have a good chance of success and could be approved as early as Thursday.

A recent poll by Charleston's Post and Courier newspaper showed both houses of the legislature would reach the two-thirds majority required under state law to move the flag, which was flown by rebelling states in the Civil War.

Several Senators on Monday spoke of being moved and inspired by the Christian forgiveness displayed by relatives of the Emanuel 9 for the shooter, adding that removal of the flag was the proper way to honor them.

"If they could be peacemakers in those dire circumstances ... I determined I can be a peacemaker when it comes to a flag flying on our State House grounds," said Senator Chip Campsen, a Republican who represents Charleston.

At least three senators spoke in favor of keeping the flag flying.

"I do understand that what happened in Charleston got a lot of people's attention," said Republican Senator Lee Bright, who is white. "But I believe we're placing the blame of what one deranged lunatic did on people that hold their southern heritage high and I don't think that's fair."

Democrat Vincent Sheheen, who is white and introduced the bill, asked legislators on Monday to approve it not because of Pinckney's "assassination" but rather because "it's the right thing to do."

Noting that he was mocked by politicians a year ago when he introduced similar legislation, he said the Charleston murders were a reminder that a racist cultural divide still existed in the state.

While some white people might have emotional ties to the Confederate flag, Senator Darrell Jackson, a black Democrat, reminded legislators that the descendants of slaves look at it differently.

"When I see a Confederate soldier, I don't get goosebumps and get all warm and fuzzy," he said. "All I'm saying is you can't force all of us to have the passion that some of you have about certain things."

The Confederate flag was raised atop the State House dome in 1961 as part of centennial commemorations of the Civil War. Critics said that was a direct challenge to civil rights, voting rights and desegregation protests at the time.

In 2000, after the National Association for the Advancement of Colored People announced an economic boycott of South Carolina and protesters marched on the state capital, lawmakers agreed to a compromise, moving the flag to a monument to Confederate war dead on the capitol grounds.