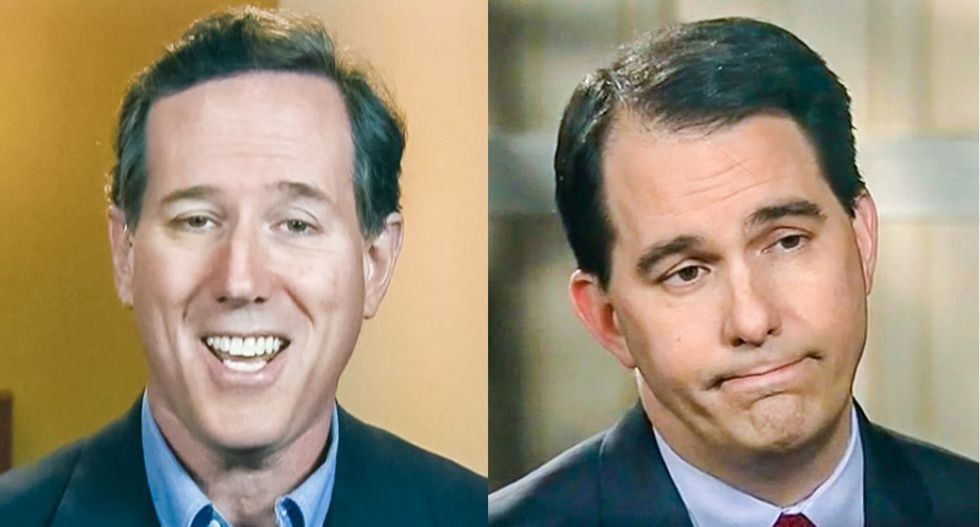 According to Politico, the presidential candidate took a veiled swipe at Wisconsin Gov. Scott Walker's wife, saying her approval of same-sex marriage could influence her husband's policies.

“Spouses matter,” Santorum said in an interview Monday. “When your spouse is not in-sync with you — particularly on cultural issues, moral issues — [you] tend not to be as active on those issues.”

In a recent interview with the Washington Post, Walker's wife, Tonette along with the couple's two sons, said she was not pleased with her husband's disapproval of same-sex marriage

“Our sons were very disappointed,” Tonette Walker said. “I was torn. I have children who are very passionate [in favor of same-sex marriage], and Scott was on his side very passionate.”

“It’s hard for me because I have a cousin who I love dearly — she is like a sister to me — who is married to a woman, her partner of 18 years,” she added.

For Santorum, for whom issues of homosexuality is always top dog on his list, the rift in Walker's family gives him an opportunity to get a leg up over his Midwestern rival.

Trump recently retweeted an offensive comment aimed at former Florida Governor Jeb Bush's Mexican wife stating, "#JebBush has to like Mexican illegals because of his wife.”

In a rare sign of realizing he may have gone too far, Trump later deleted the tweet.