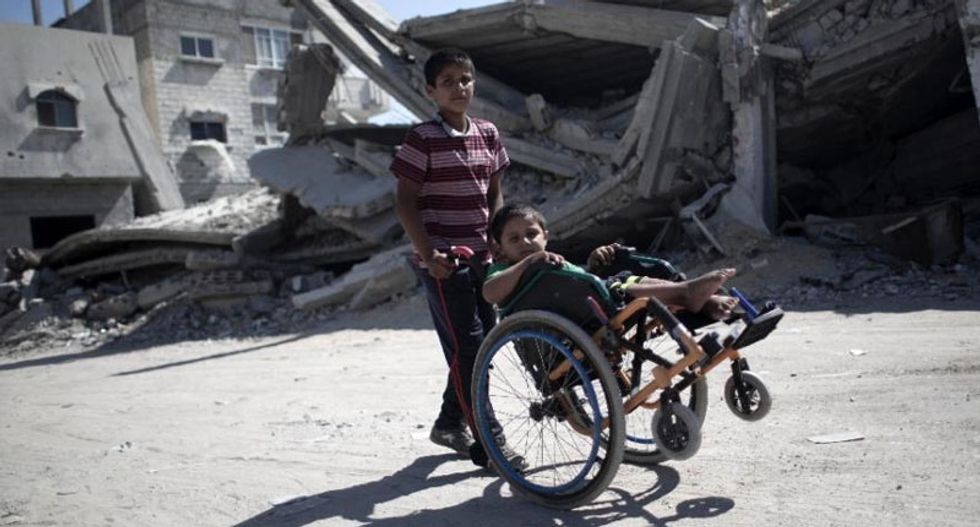 A Palestinian boy pushes the wheelchair of his brother, injured during the 50-day war between Israel and Hamas militants in the summer of 2014, on July 29, 2015 in Rafah (AFP Photo/Said Khatib)

An analysis of an Israeli assault in the Gaza Strip following the capture of one of its soldiers during last year's war in the Palestinian territory shows "strong evidence" of war crimes, Amnesty International said Wednesday.

The London-based rights group called for those responsible for the alleged offences to be prosecuted as it published a detailed analysis of the Israeli military operation using eyewitness accounts, satellite imagery, photos and videos.

"There is strong evidence that Israeli forces committed war crimes in their relentless and massive bombardment of residential areas of Rafah in order to foil the capture of Lieutenant Hadar Goldin, displaying a shocking disregard for civilian lives," Philip Luther, director of the Middle East and North Africa Programme at Amnesty International, said in a statement.

"They carried out a series of disproportionate or otherwise indiscriminate attacks, which they have completely failed to investigate independently."

Israel strongly denied the accusations, calling Amnesty's report "fundamentally flawed in its methodologies, in its facts, in its legal analysis and in its conclusions".

"When one reads the report, the impression is given that the (Israeli military) was fighting against itself -- as there is almost no mention of the military actions of Hamas and other Palestinian terrorist organisations," the foreign ministry said in a statement.

The incidents addressed in the report centred on August 1, 2014, which has become known as "Black Friday," when Goldin was captured shortly after a ceasefire was announced. He was later declared dead.

In response, the military was said to have implemented the so-called Hannibal Directive -- a controversial procedure which allows for an intensive military response to secure the rescue of a captured soldier.

Israel bombed the city of Rafah and the surrounding area in the southern Gaza Strip near the border with Egypt. According to Amnesty, at least 135 civilians were killed in the air and ground assault.

Civilians had begun to return home due to the ceasefire announcement, Amnesty said.

"Massive and prolonged bombardment began without warning while masses of people were on the streets, and many of them, especially those in vehicles, became targets," Amnesty said.

"Eyewitness accounts described horrifying scenes of chaos and panic as an inferno of fire from F-16 jets, drones, helicopters and artillery rained down on the streets, striking civilians on foot or in cars, as well as ambulances and other vehicles evacuating the wounded."

A UN report in June said both Israel and Palestinian militants may have committed war crimes during the Gaza war, while decrying "unprecedented" devastation and human suffering.

The UN report condemned the "indiscriminate" firing of thousands of rockets and mortars at Israel by Palestinian militants as well as the "huge firepower" Israel used in Gaza.

The Palestinian enclave of 1.8 million people, under an Israeli blockade, has seen three wars in six years. Hamas, the Islamist movement that runs the Gaza Strip, is considered a terrorist organisation by Israel, the United States and the European Union.

Amnesty partnered with researchers from Forensic Architecture, based at Goldsmiths, University of London, for its report.

Israel accused Amnesty of "a false narrative – claiming that four days of military operations by the IDF were in direct response to the killing and kidnapping of one IDF soldier," the foreign ministry said, referring to the Israel Defence Forces.

"It seems that Amnesty forgot that there was an ongoing conflict – during which the IDF was operating to stop rocket fire and neutralise cross-border assault tunnels, and Palestinian terrorist organisations were actively engaging in intensive conflict against the IDF from within the civilian environment."

Deborah Hyams from Amnesty told journalists however said the Hannibal Directive "is a policy and those who ordered it should be prosecuted".

Last summer's 50-day war took a heavy toll on Gaza, killing 2,251 Palestinians, including more than 500 children. Seventy-three people were killed on the Israeli side, including 67 soldiers.