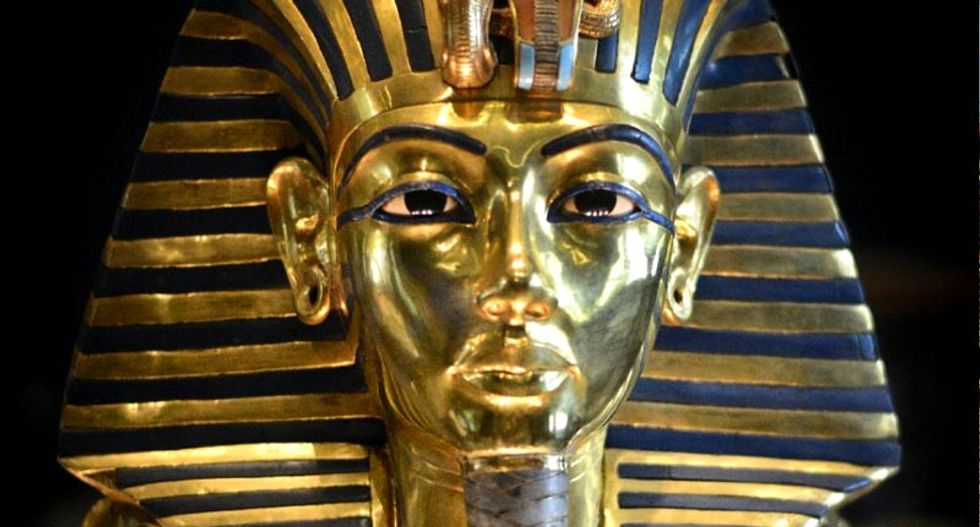 The burial mask of Egyptian Pharaoh Tutankhamun, who ruled from 1334 to 1325 BC (AFP Photo/)

Egyptian curator Medhat Abdallah laughs when reminded of the "curse of Tutankhamun" as he cleans an ancient gilded bed found in the boy king's burial chamber nearly a century ago.

The 3,300-year-old relic is one of hundreds of artefacts, never before displayed, from the treasure of King Tutankhamun set to be unveiled in a "mega museum" under construction near the Giza pyramids.

"We are studying how these objects were made at that time. They will be displayed at the Grand Egyptian Museum once it's ready," Abdallah told AFP, as he inspected the relic in a laboratory at the new museum site.

But nearly a decade after the Grand Egyptian Museum -- dubbed "Tutankhamun's new home" -- was conceived, the project is far from complete.

Years of political turmoil and a financial squeeze have delayed the construction. Officials now say the museum will open in 2022 and not this year as previously scheduled.

About 5,000 workers toil over three shifts to build the museum on 47 hectares (117 acres) of land near the pyramids.

It will display about 100,000 artefacts in five zones, including the entire Tutankhamun trove of about 4,500 relics.

Tutankhamun's mummy will remain in Luxor's Valley of the Kings where it was found in 1922.

Founded in the late 19th century, the Egyptian Museum of Antiquities, widely known as the Cairo museum, has long been the centrepiece of the country's collection of pharaonic jewels.

But the pink, neoclassical landmark near the capital's iconic Tahrir Square is overflowing with mummies, statues and other relics, so officials decided a new museum was needed.

"Look at the existing Cairo museum... it's like a store. It's dark... thousands and thousands of exhibits are just lying around," said renowned archaeologist and former antiquities minister Zahi Hawass.

About 60,000 artefacts are exhibited in the Cairo museum, including more than a dozen royal mummies, while more than 100,000 objects are kept in storerooms.

Former culture minister Farouk Hosny said he came up with the idea of building a bigger museum after a visit to Paris where an expert mocked the Cairo museum as a "storehouse".

"I felt like I was stabbed in the heart. That's when I thought of building a grand museum near the pyramids," he said.

Experts have criticised the authorities for poor maintenance of the Cairo museum, particularly after a botched repair of the golden funerary mask of Tutankhamun.

A curator accidentally knocked off the mask's braided beard when he removed it from its case last year to fix the lighting.

The repair showed the sticky aftermath of what appeared to have been overzealous use of glue to fix the beard in place.

"Tutankhamun's treasures are presented in only two galleries in one room at the Cairo museum, which is not adequate for such fantastic objects," said Tarek Tawfik, project director of the Grand Egyptian Museum.

The new museum will display objects thematically, he said.

"They will be presented in a way that reminds (people) of the environment in which they were found," he told AFP during a visit to the new complex.

The delay in building the new museum has driven up the construction bill.

Antiquities Minister Mamdouh Damaty said it was now expected to cost $1.1 billion (972 million euros), against the initial estimate of $800 million.

The project was initially partly funded by a Japanese loan of $340 million.

"Then the political turmoil began. We had a revolution. The grand museum faced crisis," Damaty said, adding that talks were being held over an additional $400 million Japanese loan.

Egypt has been rocked by political upheaval and deadly violence since the 2011 uprising that brought down longtime president Hosni Mubarak, with the army toppling his Islamist successor Mohamed Morsi.

Tourist arrivals have plummeted, with about 10 million visitors in 2014, down sharply from almost 15 million people who visited the country in 2010, lured by its archaeological sites and Red Sea resorts.

"But it is not strange for such a mega international project. We are building here a new landmark."

Damaty hopes that a "soft opening" in May 2018 showcasing only the Tutankhamun collection would help raise funds.

Hawass said a government dependent on aid from Gulf allies would fail to complete the project.

"How can you take money from a government to build a museum when it needs to give it to the people to buy food, for electricity, for housing?

"This museum will not be opened at all."

Tourists are also sceptical of shifting the Tutankhamun treasures to the new museum.

"This is the second tomb of Tutankhamun. I think Tutankhamun has to live here."