The growing danger to women and girls in central Mexico 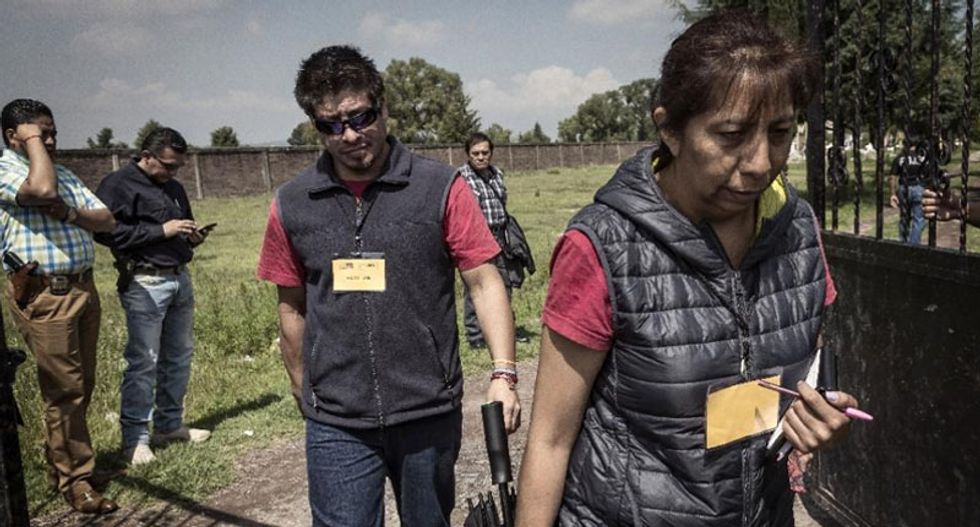 Guadalupe Reyes (right) and her husband Bernardo Gonzalez leave a cemetery in Mexico on June 19, 2015, after the exhumation of a corpse buried in a mass grave, which could belong to her 18-year-old daughter Mariana (AFP Photo/Omar Torres)

Guadalupe Reyes clings to thoughts of her daughter one day flying a plane, a dream for the 18-year-old girl.

Until the teenager vanished 10 months ago in central Mexico.

Mariana is the latest in a growing number of girls and women who have disappeared, or worse, in the populous State of Mexico, which has become the most dangerous region for women in a country that is all too used to violence.

The authorities believe they found Mariana's remains and buried them in a common grave without the presence of her family.

But like many Mexicans looking for their missing kin, Reyes has little trust in the authorities.

Late last month, the desperate mother convinced officials to exhume fragments of skull and bones to conduct her own DNA tests.

"I'm not losing hope that she's alive. But we have to wait for the DNA results," Reyes said, almost whispering, after independent forensic experts dug up the remains in a cemetery of the rural community of Nextlalpan.

She was never allowed to see the remains before the burial.

"They said that we were not psychologically ready and that we had to accept what happened," Reyes said.

The willowy, black-haired girl, who took violin lessons online, left her home on September 17 last year to make photocopies of documents she needed to get a pilot scholarship. She never came back.

In the 1990s, Ciudad Juarez became infamous as the bodies of hundreds of murdered women turned up around the desert border city.

But the State of Mexico, a region known as Edomex that surrounds Mexico City, at the heart of the country, has eclipsed Juarez.

Mutilated, burned or half-naked bodies have turned up in fields, abandoned lots or sewage waters in the state of 15 million people.

According to the national statistics institute, 14 of every 100 murders of women took place in Edomex between 2008 and 2013, compared to 13.5 in Chihuahua, the state where Juarez is located.

The Edomex prosecutor for gender crimes, Dylcia Garcia, said the murders are due to domestic violence or sexual assaults.

But the president of the Justice, Human Rights and Gender organization, Rodolfo Dominguez, said the homicides come in the context of a brutal drug war in which 80,000 people have died and another 22,000 have gone missing.

"Mexico lives a generalized violence which is the product of a militarized strategy against organized crime and this worsens the violence against women," he said.

"It's a situation that gets worse because of the high levels of impunity."

Several bodies have been found in the De Los Remedios river, in which sewer waters are dumped in the city of Ecatepec. That's where Mariana's alleged remains were discovered.

"This is one of the favorite places to dump bodies," said David Mancera, president of the civic association Solidarity with the Families.

He gestured at how "easy" it is to get rid of corpses as he looked over a section of the grayish waterway known as "the devil's curve."

"This is worse than Ciudad Juarez. It doesn't stop," said Irinea Buendia, mother of a young woman who, according to an initial investigation, committed suicide in 2010.

Buendia took her case to the Supreme Court, which in a landmark ruling forced authorities to reopen the investigation and treat the death of Mariana Lima as a possible femicide.

The journalist Humberto Padgett, in his book "The Dead of the State," wrote that 1,997 women were murdered in Edomex between 2005 and 2011 -- a period during which Enrique Pena Nieto was governor of the state. He is now the country's president.

The state prosecutor's office did not provide figures of female murders despite repeated requests by AFP.

But Garcia, the gender crimes prosecutor, said that "in numeric terms it is not as terrible as civil organizations say."

Recently, passersby in Ecatepec found a woman in agony on the street: half her body was burned and still smoking. She was dead by the time the police arrived.

The victim was a single mother who had disappeared as she headed home from buying milk.

Many women live in fear in Edomex.

A group of young women walking along a busy pedestrian bridge recalled how a neighbor disappeared two months ago.