'This is our Selma': North Carolina voting rights trial threatens 50 years of progress 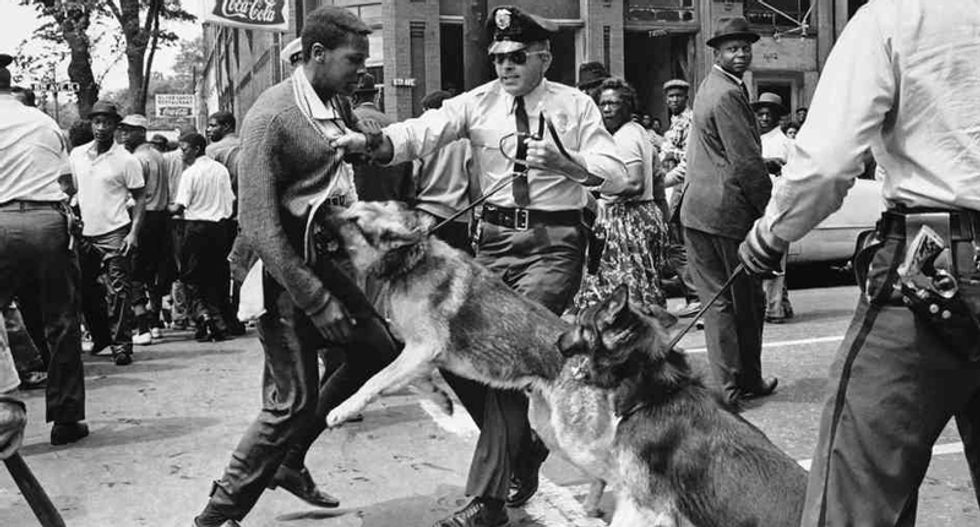 A young Selma demonstrator is attacked by a police dog. ( NPR.org)

A landmark voting rights trial that opens in North Carolina on Monday will determine the way the 2016 presidential election is conducted in the state and could have long-lasting implications for the politics of the American south.

The federal district court in Winston-Salem is expected to take at least two weeks to consider a legal challenge to the state’s recent changes to its voting laws, which are widely regarded to be among the most restrictive in the country. Republican governor Patrick McCrory, in his official capacity, and the state itself will be on trial, accused of intentionally discriminating against black voters in an attempt to drive down turnout within this traditionally Democratic-voting community.

The stakes are high in North Carolina State Conference of the NAACP v Patrick McCrory. Tens of thousands of voters could be impacted by its outcome in a state that backed Barack Obama in 2008 but opted for his opponent Mitt Romney four years later, both on the slightest of margins.

The legacy of half a century of the voting rights struggle also hangs in the balance. Paradoxically, the trial begins just three weeks shy of the 50th anniversary of the signing into law on 6 August 1965 of the Voting Rights Act, following the historic Selma to Montgomery march led by Martin Luther King. Plaintiffs in the case see the lawsuit as a key test of whether President Lyndon Johnson’s groundbreaking legislation will continue to offer protection to black voters against discrimination, particularly in the deep south.

“Fifty years ago Dr King fought to expand the opportunity to vote. Today we are in a battle to stop this state taking rights away from North Carolina citizens – this is our Selma,” said Reverend William Barber, president of the North Carolina NAACP, the lead plaintiff.

Donita Judge of the Advancement Project, who is legally representing the NAACP chapter at trial, said: “This is a fight we thought we had won 50 years ago. What happens here will impact so many other states in the south.”

The North Carolina tussle is not isolated. According to the Brennan Center , a non-partisan institute that specializes in voting practices, 21 states have put in place new restrictions over the past five years – 14 of which will have barriers up in the 2016 presidential election.

The only other state so far to have faced a trial over its restrictive voting laws, Texas, was castigated by a federal judge for deliberately “suppressing the overwhelmingly Democratic votes of African Americans and Latinos”. The state appealed and a decision from the fifth circuit court of appeals is expected any day.

Wendy Weiser, director of the Brennan Center’s democracy program, said that 2016 is set to be the first presidential election in 50 years where voters have to negotiate hurdles in the way of participation. “Over the last couple of years we’ve seen an intense push across the country to pass restrictive voting laws, and North Carolina is one of the most restrictive of all,” she said.

North Carolina’s voter restriction law, HB 589, was the first to be introduced following the US supreme court ruling in June 2013 that punched a hole in the Voting Rights Act. Shelby County v Holder effectively gutted the key provision of the act that prevented largely southern states from tampering with voting laws without prior approval from the federal government.

On the day the Shelby ruling was made, Tom Apodaca, the Republican chairman of the North Carolina senate rules committee, said: “So, now we can go with the full bill.” The draft bill that had been sitting dormant for months was packed with new restrictions and rushed through the state legislature a month later.

In their brief to the Winston-Salem trial, the plaintiffs argue that HB 589 is a violation of the part of the Voting Rights Act that still stands – section 2, which prohibits voting practices that discriminate on the basis of race, color or language. They also argue that the new restrictions are a breach of the 14th amendment of the US constitution that afforded equal protection under the law to black people as part of the post-civil war reconstruction.

The plaintiffs say that if it is allowed to stand, HB 589 will have a chilling effect on black voters and undo the recent gains that have been made in expanding the African American vote in North Carolina. Between 2000 and 2012, the state rose from 37th in the nation for turnout in presidential elections to 11th – an improvement achieved largely through a surge in the proportion of registered black voters going to the polls that reached 70% in 2012.

Last month Republican leaders in the assembly made tweaks to HB 589 that softened the most hotly contested element of the law – a provision that disenfranchised voters who could not produce a narrowly defined photo-ID card. Though that aspect of the law has been removed from the Winstom-Salem trial, lawyers for the plaintiffs are looking at its practical application and further legal challenges could follow.

That still leaves four other major restrictions in the new law that the plaintiffs argue pose an intentional threat to black voter participation. They are:

· The reduction of early voting days from 17 to 10, which is a particular blow to African Americans, who tend to vote earlier than white voters. About 700,000 ballots were cast in the seven early voting days that are removed under HB 589 in both of the past two presidential elections.

· The end of same-day registration that allows a voter to turn up at the polls, register and vote all at the same time. This restriction was in place during the 2014 midterm elections in North Carolina and the plaintiffs argue that it disenfranchised thousands of black voters who could not register in time.

· The elimination of out-of-precinct voting. Many thousands of North Carolinians could be caught by the decision to stop counting any ballot cast by an individual outside his or her electoral precinct. Expert opinion that will be produced at the trial shows that African Americans tend disproportionately to cast their ballots out of precinct compared with whites.

· The prohibition of pre-registration drives targeting young people. Between 2010 and 2013 some 150,000 young people were registered to vote before they turned 18 in anticipation of coming of age. The plaintiffs estimate that if the state is allowed to outlaw such drives the turnout of young voters in 2016 will decline by 50,000.

In their defendants’ brief , McCrory and the state of North Carolina deny that the new law has any discriminatory intent or effect. They say that all of its provisions including limiting early voting and eliminating out-of-precinct ballots apply equally to all citizens of whatever race or ethnicity.

“The burdens associated with completing any of these tasks are identical for all voters without regard to their race ... None of these practices constitute severe burdens and are therefore constitutional.”

The state dismisses the evidence of voting experts on the discriminatory impact of the changes. They argue that the increased turnout in the midterm elections in 2014, when several of the new restrictions were already in place, gives the lie to the claims.