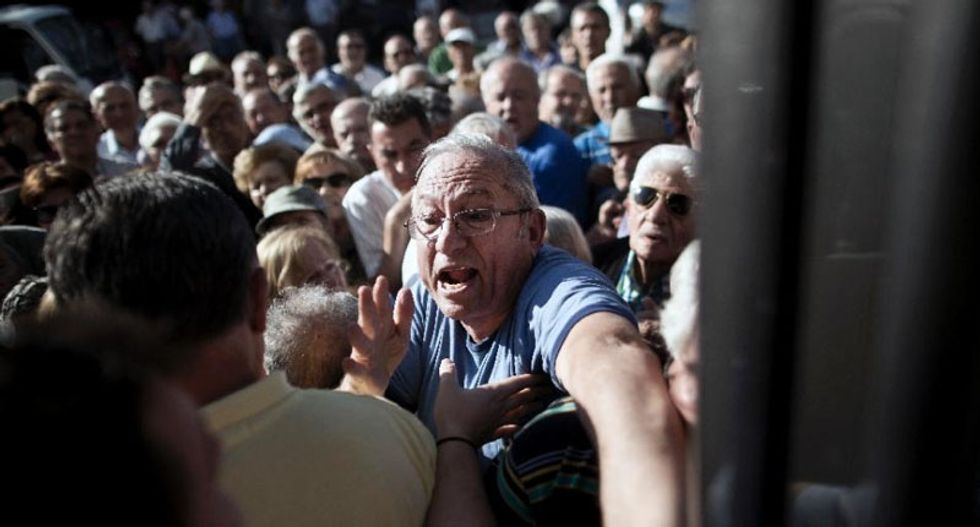 In chaotic scenes, thousands of angry elderly Greeks on Wednesday besieged the nation's crisis-hit banks, which have reopened to allow them to withdraw vital cash from their state pensions.

"Let them go to hell!" said one pensioner waiting to get his money, after failed talks between Athens and international creditors sparked a week-long banking shutdown.

The Greek government, which closed the banks and imposed strict capital controls after cash machines ran dry, has temporarily reopened almost 1,000 branches to allow pensioners without cards to withdraw 120 euros ($133) to last the rest of the week.

The move has again sparked lengthy queues at banks across Greece -- and outrage from many retirees who are regarded as among the most vulnerable in society, exposed to a vicious and lengthy economic downturn.

"I took the money out. I know that this is not enough, but that's what I could take and so I took it," said Dyonisia Zafiropoulou, a former employee of the national electricity company DEI.

She said she was convinced Greece could weather the financial crisis.

"I lived during the Occupation, I experienced hardship and I think we will overcome this moment," she told AFP.

Under banking restrictions imposed all week, ordinary Greeks can withdraw up to 60 euros a day for each credit or debit card -- but many of the elderly population do not have cards.

Another customer, a retired mariner who asked not to be named, told AFP he had no cash to buy crucial medicine for his sick wife.

"I took out 120 euros -- but I have no money for medication for my wife, who had an operation and is ill," he added.

In Greece's second biggest city, Thessaloniki, a group of about 200 pensioners held an angry protest outside the National Bank of Greece.

Retired Greeks traditionally draw their pensions in cash from their local bank.

"Each month the money is paid normally -- but not this month," said a retired employee of the Bank of Piraeus.