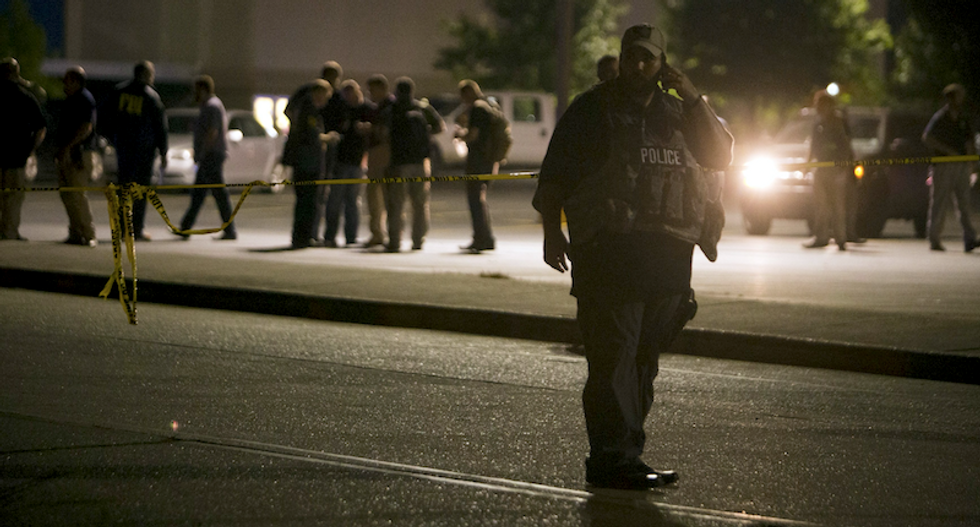 A member of the police (front) stands outside a movie theatre where a man opened fire inside a crowded movie theater on Thursday night in Lafayette, Louisiana July 24, 2015. (REUTERS/Lee Celano)

A lone gunman opened fire inside a crowded movie theater in Lafayette, Louisiana, on Thursday evening, killing two people and wounding seven before taking his own life, police said.

Gunfire erupted during a 7 p.m. showing of the film "Trainwreck." Two people died in the hail of bullets before the 58-year-old suspect killed himself with a handgun as officers rushed to the scene, Lafayette Police Chief Jim Craft said.

The shootings took place almost three years to the day after 12 people were killed at a cinema in Aurora, Colorado, and follows several mass shootings in the United States in recent weeks.

Authorities said seven people were wounded, three of them critically. One person underwent surgery and "was not doing well," Craft said.

Police said they knew the gunman's identity but were not releasing his name during the early stage of the investigation. They offered no immediate motive and did not disclose any clues they might have found.

"The shooter is deceased. We may never know," Craft said, adding that the man had criminal history that he described as "pretty old."

Police were collecting evidence from the theater and interviewing witnesses early on Friday after completing an inspection of the building and the suspect's car for possible explosives, said Sgt. Brooks David of the Louisiana State Police.

Investigators also headed to the gunman's home and would speak to his family and friends, Craft said.

None of the victims, who were described as ranging in age from teens to early 60s, were immediately identified by authorities.

Witnesses said the gunman abruptly stood up in the darkness of the Grand 16 Theater about 20 minutes into the movie and began shooting.

"He wasn't saying anything. I didn't hear anybody screaming either," Katie Domingue, who was watching the film with her fiancé, told the local Advertiser newspaper.

The bullets sent people scrambling from the theater, situated on a main thoroughfare in Lafayette, a city of about 120,000 people roughly 55 miles (90 km) southwest of Baton Rouge, police said.

President Barack Obama, who is traveling to Kenya on Friday, received a briefing about the shooting during a refueling stop in Germany, said White House spokesman Josh Earnest.

"The thoughts and prayers of everyone at the White House, including the President and First Lady, are with the community of Lafayette, Louisiana, especially the families of those who were killed," a statement said.

Jindal said that two of the wounded victims were teachers, one of whom told him that she survived the attack because her friend rolled over her as bullets rang out. That teacher then managed to pull a fire alarm in the theater, he said.

The shooting came three years after a gunman opened fire at a movie theater in Aurora, Colorado, during a midnight screening of the Batman film, "The Dark Knight Rises," killing 12 people and wounding 70 others.

James Holmes, a former neuroscience graduate student at the University of Colorado, was convicted last week on 165 counts of murder, attempted murder and explosives in the July 20, 2012, rampage.

Jurors in that case were trying to determine if Holmes should face the death penalty or life in prison.

The United States has witnessed several mass shootings in the last two months.

Jindal, who last month announced his candidacy for president, said he had ordered National Guard members at offices and other facilities to be armed in the wake of the Tennessee attack.