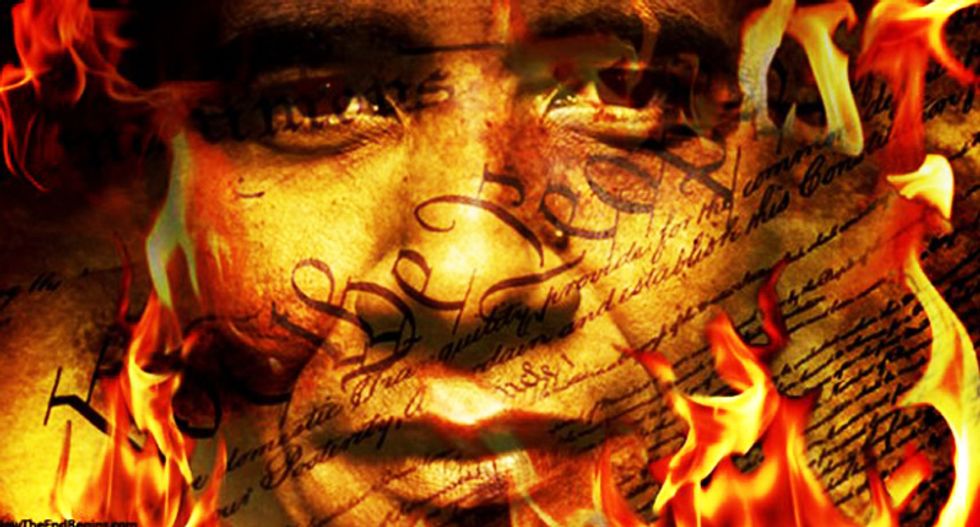 Today, July 15th, will be a day that will live on in infamy because it happens to be the day that the U.S. military -- under Commander in Chief Barack Hussein Obama -- will invade America for the greater glory of the United States of America.

At least that is what a rather substantial number of U.S. citizens who call themselves "patriots" or 'constitutional conservatives" (you may know them as "gun-toting low-information Fox-News-watching move-their-lips-when-they-read paranoid nut-cases") seem to believe ever since they were driven barking mad when a black man with a Muslim-y name became president -- most likely through election fraud.

Today is Jade Helm 15 day when the Pentagon will be conducting perfectly innocent coordinated military exercises across the southwest from Texas to California, branching upward into Colorado and Utah.

Or so they would have us believe.

If you are part of the "too much time and too little common sense" set, you probably have been led to believe that American soldiers -- brave and true and loyal to a fault, who have sworn to defend the Constitution -- are going to occupy great swaths of our awesome country until it can be turned over to the Chinese. Or Iran. Or Mexico. Or some other country or another.

If you were to ask Rep. Louis Gohmert (R) -- noted public intellectual and "thinkfluencer" from Texas -- he would tell you that those areas  will  "be overtaken by foreign radical Islamist elements which have been reported to be just across our border."

How will they do this? By using a series of inter-connecting tunnels thousands of miles long spread out between Walmart stores that have closed.

Here is proof, and it is on the Internet so you know it is true:

Of course this latest comes from a long line of the "moon landing was faked" or 'jet fuel can't melt steel" truth tellers, which, in this case, is doomsday vitamin & supplement huckster Alex Jones, who told people listening on their DIY radio kits to prepare for the end.

"They’re going to practice breaking into things and stuff. This is going to be hellish,” Jones said. “Now this is just a cover for deploying the military on the streets . . . This is an invasion.”

If you don't find Jones credible, then here is very serious 2016 Presidential wannabe, Texas Sen. Ted Cruz (R) saying it's probably not a real thing,  but then again...

"We are assured it is a military training exercise. I have no reason to doubt those assurances," Cruz said.

But wait for it: "But I understand the reason for concern and uncertainty, because when the federal government has not demonstrated itself to be trustworthy in this administration, the natural consequence is that many citizens don't trust what it is saying."

Is it irresponsible for a sitting senator to speculate that American servicemen and women might be conspiring to commit treason and lock up their fellow citizens in FEMA camps because China has a hankering to occupy Bastrop County, Texas?

It would be irresponsible not to -- particularly when you're one of fifteen candidates scrambling for yahoo votes .

Besides, I mean, come on:

That is like a thing to do every day for a year, with one day off to rest up in leap years.

And if you think it is just going to be some simple "Red Dawn" takeover with folks only being rounded up into school buses and taken to labor camps where the Chinese will force them to make iPhones for urban hipster millennials in the socialist northeastern cities, well shit may very well get real:

With Jade Helm 15 having gone viral across the internet, US Army Special Operations Command is having to push back against 'alarmists claims' that we're actually witnessing 'martial law-style' drills according to Stars and Stripes while 2 more states, Florida and Mississippi, have added exercises to their states that will include 'surgical strikes' and 'extractions' according to a news conference addressing Jade Helm 15 included in the 1st video below for you to hear for yourself. Interestingly enough, the US military is unable to view websites reporting on Jade Helm 15 due to their sophisticated firewall which prevents them from accessing 'truth' websites.

And it is not just a battle for land, it is the beginning of The End Times:

What do i do? Im in TEXAS but, they dont mention the DFW area....also i was watching a video on youtube about jade helm 15 and they mentioned a website, survivetheenddays.com....i ordered the book but im still confused. Is this jade helm 15 supposed to be the "end of the world" or the start to it. And i thought christians were supposed to be raptured anyway so they dont deal with this crap. Im just now finding jesus again and pretty much forgot everything i learned when i was younger.

But help is on the way:

Reads your Bible, and when you get confused, ask God for clearance. It is awesome.

This is big, folks.

But what the hell, we had a good run.