Tomorrow is Thursday. I suppose we all worship Thor now. 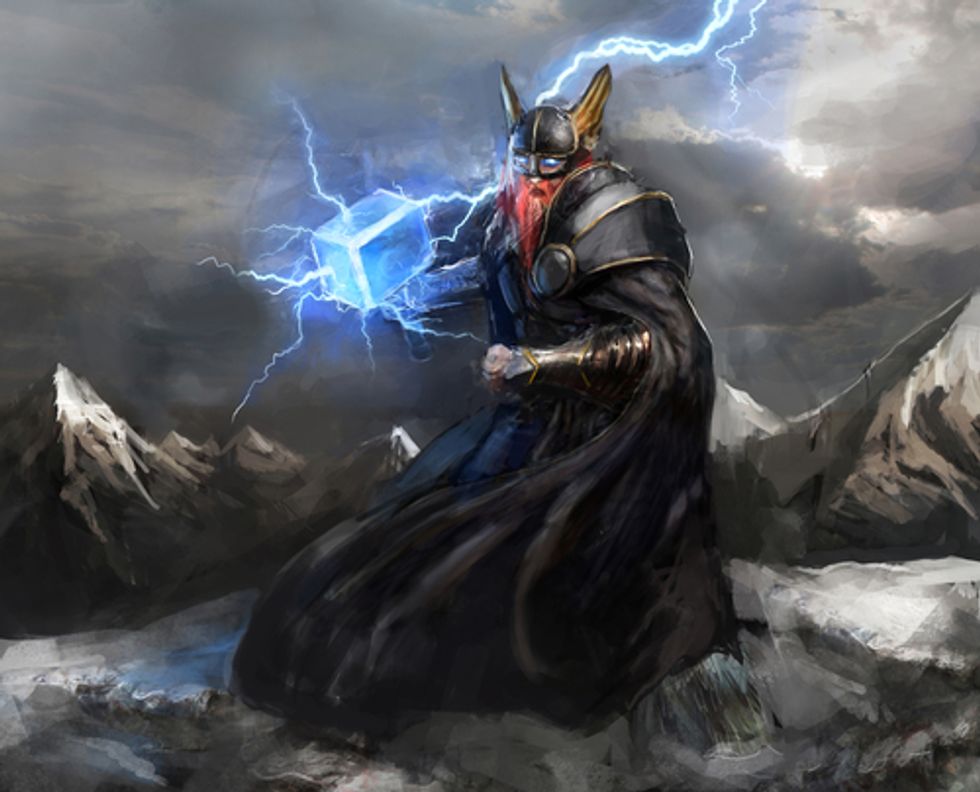 Man, Si Robertson* from Duck Dynasty really finds atheists threatening. A few months ago his brother fantasized about us being raped and murdered. Or, more to the point, about an atheist man watching his wife and daughters getting raped and murdered, because in Robertson's world, women don't have their own opinions but are merely extensions of their fathers and husbands. Now Si's pulling that trick of arguing that we don't really exist:

Robertson also said that in life-and-death situations, atheism ceases to exist. "Because if you get in a serious bind, the first thing you’re going to do is look around and say, ‘Oh (God) please help me.'"

Atheists get this one a lot, and not just from idiot Christian bigots like Robertson. I've heard this from people who actually have more invested in their religion than simply believing a Sky Fairy tells them everything they want to hear, whether it's that black people like segregation or that it's okay for grown men to marry teenagers. You hear the "no atheists in fox holes" nonsense from all corners.

It's also just plain wrong. I can't speak for other atheists, but I've had a couple of serious and scary situations in my life and never once did I pray to any god. When I had my car accident in college, for instance, I very distinctly remember thinking that if I'm going to die, then that means that I'm dead. No thoughts of afterlife, no bargaining with god. Just a simple thought that death means dead, that there will be no more thoughts or feelings. Luckily for myself and my family, I did not die. But I didn't have that atheist in a fox hole situation, either. I've just never felt that there's a god looking out for me.

Not that there's any shame in having residual belief that crops up in stressful situations. Robertson's argument rests on the belief that atheists are people who had religion and de-converted. And I don't know, maybe some of them do find themselves praying out of habit in stressful situations. Or maybe they don't! I wouldn't know. But it is just a habit, and I don't think reveals anything about how they actually feel. But it's also clear to me, from personal experience, that if you don't have that habit trained into you, that is not actually how you react to stress.

But Robertson's argument gets even funnier:

"I don’t believe — there's no such thing as an atheist," he told the Christian Post in an interview published on Friday. "Because there's too much documentation. Our calendars are based on Jesus Christ."

"Whether you believe in Him or not, every time you sign your calendar, you write down the day's date, you're saying He's here," Robertson continued.

I assume he's talking about the year, which is supposedly pegged to Christ's birth, even though the chances that whoever created this system got the date right lingers around zero. And it is true, I do agree that the year is 2015.

But I also agree that the day is Wednesday, named so after the Norse god Odin. And that tomorrow is Thursday, named after Thor. Does this also mean that I secretly believe that the gods of ancient Norsemen are real? Or am I saying that the Marvel universe is the one true religion? What about people who speak Latin-derived languages? In Spanish, today is called miércoles, after the god Mercury. Are Spanish speakers secretly followers of the old Roman pagan faith?

Honestly, I kind of hope so. Worshipping Thor seems more fun than worshipping Jesus, as an outsider to either faith.

While it's fun poking holes in the surface arguments, what I find more interesting is the unspoken but even more important argument that Robertson---and some of his smarter religious apologists---are pushing. The argument you frequently get is that God exists and that there's some kind of evidence either for that or for the belief supposedly lingering in all our hearts.

But people making this argument are rarely personally satisfied with just believing that there is a God. They also have very strong opinions that they know what God---or Odin, for you Wednesday people---believes and wants of us. Opinions that just so happen in most cases to be identical to what they also want to believe! Fancy that. Let's be clear. Robertson doesn't just want you atheists praying in foxholes. He thinks that prayer should mean you should have to sign onto the whole Robertson agenda, child brides and homobigotry and all. Which really doesn't follow from this bizarre calendar gambit.

*Correction: I originally attributed these comments to Phil Robertson. It was actually Si Robertson. I apologize for my inability to tell bearded white assholes apart and will attempt to do better in the future.