Uh, no. The fire and brimstone people aren't going to start feeding and clothing the poor. 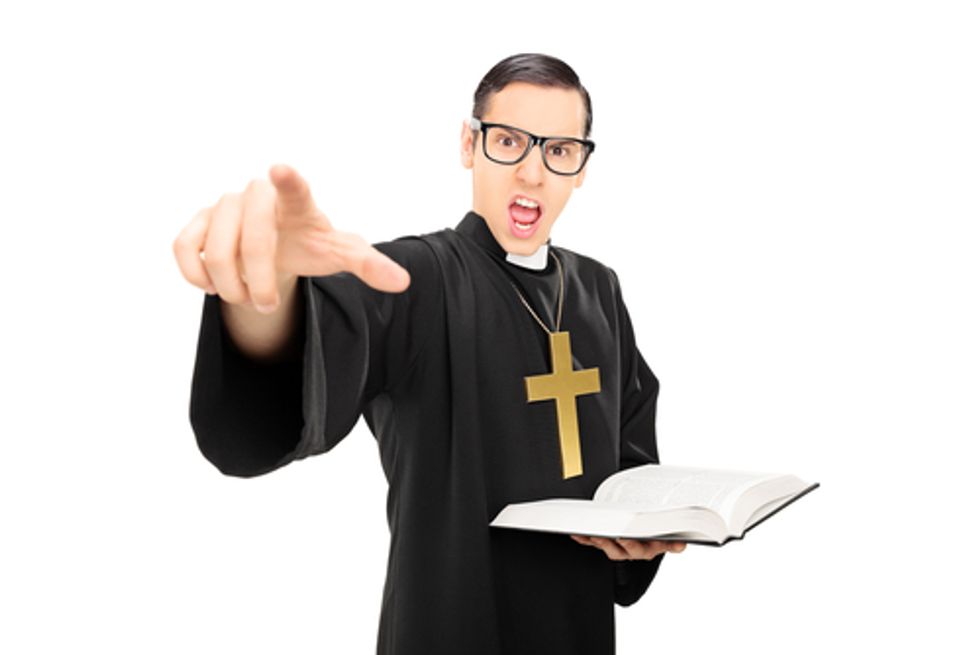 This op-ed by David Brooks titled "The Next Culture War", which asks social conservatives to drop all the sex policing stuff and instead do something like feed the poor, is topping the New York Times most-viewed and most-emailed lists. I'm guessing that is not because a bunch of religious conservatives are impressed by his argument and are forwarding it to their friends and family. No, I suspect this is all being driven by liberals who, in an attempt to show off how open-minded they are, are bending over backwards to show that they believe that religious conservatives are good people who are just misguided.

But all this article does is show a profound misunderstanding of the psychology of the religious right, and of people generally. Warning: Brooks is at his most treacly with the prose, like he went to the Anthony Kennedy school of writing. First the plea:

And then the "I know you have a good heart in there, you just need to show people" pitch:

Social conservatives could be the people who help reweave the sinews of society. They already subscribe to a faith built on selfless love. They can serve as examples of commitment. They are equipped with a vocabulary to distinguish right from wrong, what dignifies and what demeans. They already, but in private, tithe to the poor and nurture the lonely.

Such good! Kind! Generous! People! If only they would stop getting fussy about sex so the rest of us could see it!

As a visual reminder of the assholes he's talking about:

Typical quote: "And if the Democrats want to insult the women of America by making them believe that they are helpless without Uncle Sugar coming in and providing or them a prescription each month for birth control because they cannot control their libido or their reproductive system without the help of the government, then so be it."

Mmmmm...."Uncle Sugar". That's what he thinks of charitable inclinations.

Typical quote: "I don't think you should apologize for speaking out against the problem that is illegal immigration. I recognize that the PC world of the mainstream media, they don't want to admit it, but the American people are fed up," he said in defense of Donald Trump, who said that Mexico is using the U.S. as a "dumping ground" for rapists and criminals.

Mmmmm....Well, I suppose that's what Jesus would do?

Typical quote, during a campaign stop in Iowa: Santorum doesn't want to "make black people’s lives better by giving them somebody else’s money."

So spiritual. Much love.

Typical action: "To wit, he has authorized elimination of the state’s hospice program for Medicaid recipients. According to a local New Orleans news station, Louisiana residents over the age of 21 will stop receiving hospice benefits at the end of the month. As of February, low-income Louisianans with terminal illnesses and disabilities will lose access to long-term home and medical care."

Forget comforting the poor. How about leaving them to die in misery?

I could do this all day. All day. But I think I've made my point. Brooks's entire argument rests on the false assumption that religious conservatives are sincere people and that their attacks on sexual freedom flow from a devotion to an otherwise loving faith. This is false. Religious conservatives are reactionaries, mostly white, who adopt the mantle of religion to justify bigoted beliefs and to create a false narrative of victimization. Religion is the best vehicle for this, because it allows them to cultivate these beliefs without having to defend them. Everything is just, "Because God said." It's a bunch of people who don't have a good argument for begrudging others food in their mouths, beds under their asses, and a right to plan our own sex and reproductive lives. So they just say that some magical asshole in the sky said so.

Which is why they are never, ever going to do the right thing. I doubt they see the point of religion if it's to do the moral thing. You can do the moral thing all on your own, just because it's the right thing to do. For them, Jesus is only handy because he provides cover to be an asshole and claim it's "faith". That's that. If you don't get this, you don't understand the first thing about 21st century American politics.