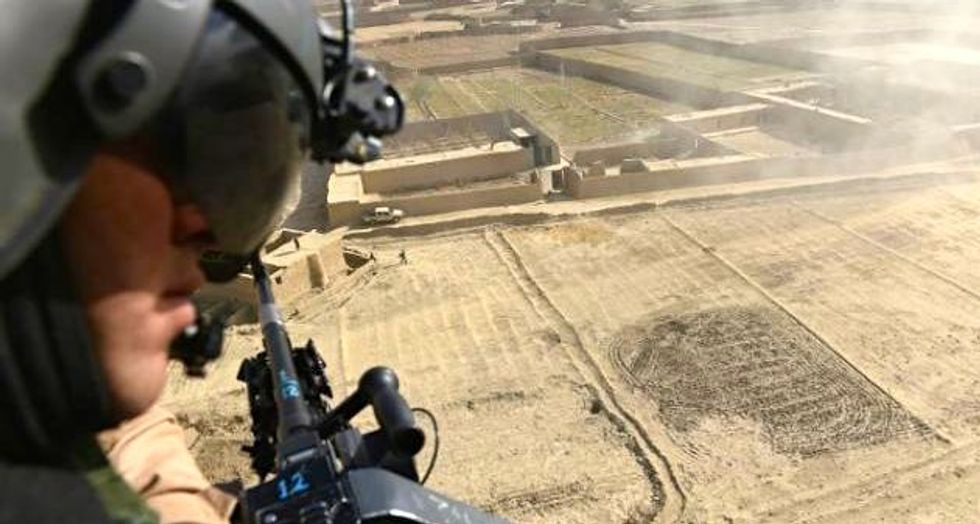 An Afghan soldier looks out from a helicopter over part of Paktika province, where the Pentagon says a senior Al-Qaeda commander was killed by a US air strike

A US air strike in Afghanistan killed a senior Al-Qaeda commander in charge of suicide bombing and two other militants, the Pentagon said Friday.

The attack, which occurred in Paktika province on July 11, killed Abu Khalil al-Sudani, a "high-ranking Al-Qaeda operational commander", the Pentagon said in a statement released to reporters in Iraq who were travelling with US Defense Secretary Ashton Carter.

"Al-Sudani was one of three known violent extremists killed in the strike. The death of al-Sudani will further degrade Al-Qaeda operations across the globe," the statement said.

The Pentagon described Sudani as a senior member of the group's "shura", or council, and head of Al-Qaeda's suicide and explosive operations, and said he was directly linked to plotting attacks against the United States.

"He also directed operations against Coalition, Afghan and Pakistani forces, and maintained a close association with Ayman al-Zawahiri, Al-Qaeda's leader," the statement said.

In the statement, Carter said the killing of Sudani underscored the work done by General John Campbell, the commander of NATO forces in Afghanistan, and his troops "to take the fight to Al-Qaeda".

"We will continue to counter violent extremism in the region and the world," Carter said.

Already struggling with the rise of rival jihadists from the Islamic State group, Al-Qaeda has suffered a series of setbacks in recent months with several commanders reported killed.

Its second-in-command Nasir al-Wuhayshi, head of its powerful Yemeni branch, was killed in a US drone strike in June, in the heaviest blow to the jihadist network since the death of Osama bin Laden.

Meanwhile in Syria, a US-led coalition air strike this month killed Muhsin al-Fadhli, the leader of Al-Qaeda's offshoot Khorasan Group, which is accused of plotting attacks against the United States and its allies.

Al-Fahdli was so trusted by Bin Laden's inner circle that he was among the few who knew in advance about the 9/11 attacks in New York.

Despite the drawdown, coalition forces carried out 106 military air strikes in June, a sharp jump compared to the previous month when it carried out 41 strikes, according to NATO statistics.

But that figure is still significantly lower than previous years.

US President Barack Obama has backpedalled on plans to shrink the US force in Afghanistan this year by nearly half, agreeing to keep the current level of 9,800 US troops until the end of 2015.