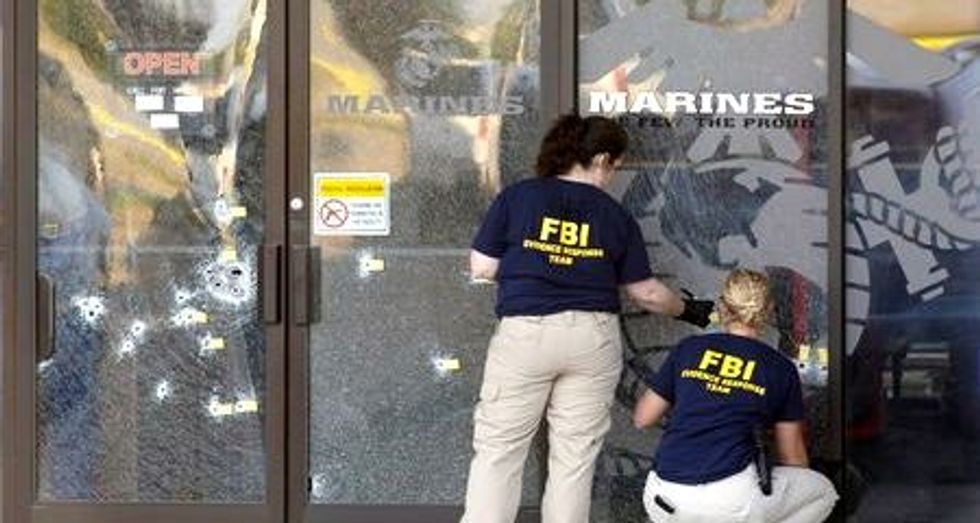 The man suspected of killing five members of the U.S. military in Tennessee last week was in Qatar at least once during a 2014 trip to the Middle East, according to two U.S. government sources who said reasons for the stopover were still unknown.

U.S. investigators are trying to piece together Mohammod Youssuf Abdulazeez's travels to the region to see if he was radicalized by a militant group such as Islamic State. But they have no evidence he was in contact with militant groups or individuals.

On a seven-month trip to visit family in Jordan, it is uncertain how long he may have spent in the Qatari capital, a political crossroads in the region. Qatar is home to jihadist supporters as well as a U.S. air base.

Abdulazeez, a Kuwaiti-born naturalized U.S. citizen, was killed in a gunfight with police on Thursday after he sprayed gunfire at a military recruiting center in Chattanooga, then drove to a nearby Naval Reserve Center where he shot and killed four Marines. Three people were wounded, including a sailor who died on Saturday.

The shooting follows a series of attacks, or thwarted attacks, in the United States and other countries by Muslims claiming to be inspired by Islamic State or other militant groups. Such "lone wolf" attacks by militant, radicalized U.S. Muslims acting on their own pose a greater risk to the country than a large-scale operation, President Barack Obama has said.

Earlier on Monday, another source close to the probe said investigators had evidence that the suspected gunman had online exposure to general jihadist propaganda that may have inspired the rampage.

But they have not turned up any specific directive or exhortation from a militant group such as Islamic State, according to the source, who asked for anonymity when discussing sensitive information. Even so, the Federal Bureau of Investigation has said it is investigating the attack as an act of terrorism.

Abdulazeez apparently did not use a laptop but could have read jihadist propaganda on his smart phone, the sources close to the investigation and a second source told Reuters.

More details emerged on Monday about Abdulazeez's possible frame of mind leading up to the attacks. He had drug abuse problems and was worried about debt, according to his family and a diary he left behind, ABC News reported, citing a family representative.

Close friends told Reuters previously that the suspected shooter drank alcohol and smoked marijuana, had received treatment for drug problems, and struggled to reconcile those habits with his Islamic beliefs. His family said in a statement at the weekend that he suffered from depression.

U.S. lawmakers said on Sunday they will examine possible shortcomings in law enforcement or intelligence in the case, which highlighted growing concern about possible Internet-based directives from Islamic State leaders in Syria.

Abdulazeez, an engineer, wrote about having suicidal thoughts and "becoming a martyr" as far back as 2013 after losing his job due to drug use, both prescription and non-prescription, the family representative told ABC News.

ABC said that Abdulazeez was taking sleeping pills to deal with an overnight shift at work, and was considering filing for bankruptcy because he was thousands of dollars in debt.

In April, Abdulazeez was charged with driving under the influence. He had faced a July 30 court date.

There is also evidence of family strife. Abdulazeez's mother filed for divorce in 2009, alleging physical, verbal and sexual abuse by his father, but the two eventually reconciled and the suit was dismissed, according to court records. In her petition Rasmia Abdulazeez also alleged that her husband Youssuf Abdulazeez had beaten his children on occasion.

Abdulazeez graduated from Red Bank High School near Chattanooga and earned a bachelor's degree in electrical engineering from the University of Tennessee at Chattanooga. On a resume posted on Indeed.com, he listed three jobs since 2010, all internships.

Abdulazeez returned from a trip to Jordan in 2014 concerned about conflicts in the Middle East and the reluctance of the United States and other countries to intervene, according to two friends who had known him since elementary school.

Abdulazeez went to the Middle East in 2010 and visited several countries, one of his friends told Reuters. He then went to Jordan in 2014 to work for his uncle, and lived with his uncle and his grandparents there, he said. Both friends spoke with Reuters on condition they not be named because they feared a backlash.

According to Abdulazeez's friends, he owned handguns and purchased three assault rifles on an online site, Armslist.com, after returning from Jordan, using them for target practice.

Friends said he had always liked shooting, starting with BB guns and paintball, and that he enjoyed driving fast cars.