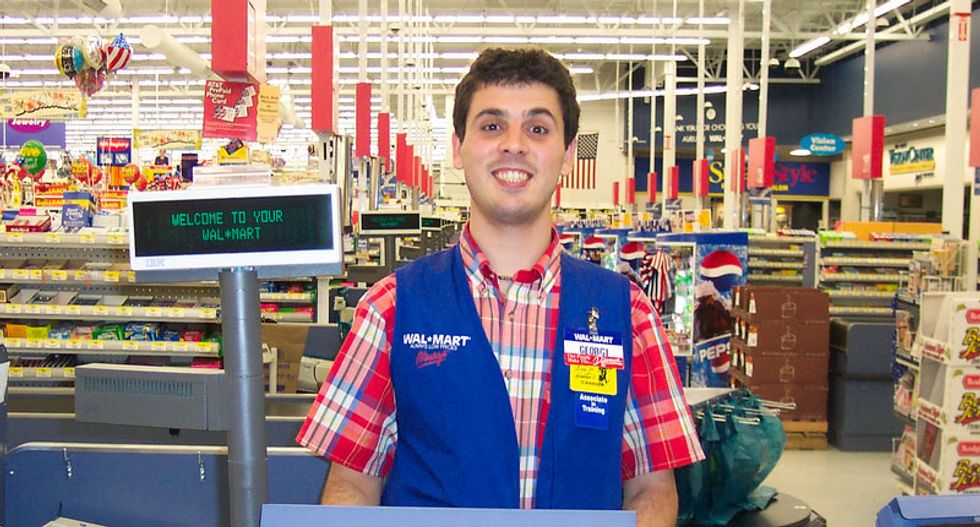 A Wal-Mart Stores Inc employee sued the retailer on Tuesday, saying its prior policy of denying health insurance benefits to the spouses of gay employees violated gender discrimination laws.

Jackie Cote, an office manager who has worked at Walmart stores in Maine and Massachusetts since 1999, said in the lawsuit that her wife, Diana Smithson, developed cancer in 2012 and that the denial of insurance led to $150,000 in medical debt, hampering her recovery.

Cote and Smithson were married in Massachusetts in 2004, the same year a court ruling made the state the first in the country to allow gay nuptials.

Smithson worked for Wal-Mart until 2008, when she left to care for Cote's elderly mother, according to the lawsuit. The company then repeatedly denied requests by Cote to add her wife to her insurance policy.

When Cote brought her claims to the U.S. Equal Employment Opportunity Commission, Wal-Mart said federal anti-discrimination laws did not apply to lesbian, gay, bisexual and transgender employees, so it did not have to offer benefits to their spouses.

Cote's lawsuit called the policy a form of gender discrimination because the wife of a male employee would receive health insurance, and even after the 2014 change, Wal-Mart workers still live with the uncertainty of losing spousal coverage.

"Benefits provided by Wal-Mart as a matter of grace ... are not secure and could potentially be withdrawn just when large health care costs are incurred," the lawsuit says.

A Wal-Mart spokesman declined to comment except to say its benefits coverage before the 2014 change was legal.

Cote is represented by Gay & Lesbian Advocates & Defenders. The rights group is seeking to certify a nationwide class of current and former gay Wal-Mart employees who were legally married before 2014, when the company began covering same-sex spouses.

The Supreme Court last month said the U.S. Constitution provided same-sex couples the right to marry, making their marriages legal in all 50 states.

'They’re turning on you': Lincoln Project pokes at Trump's freakout over their last ad

The Lincoln Project triggered former President Donald Trump last week with an ad talking about the recent search for classified documents at his Mar-a-Lago resort in Florida. The ad last week questioned whether someone close to Trump had sold him out to the FBI and told the government about what was kept in the safe. The ad only appeared in Bedminster, New Jersey, where Trump typically spends his summers.

The ex-president responded to the ad by raging that they were "perverts."