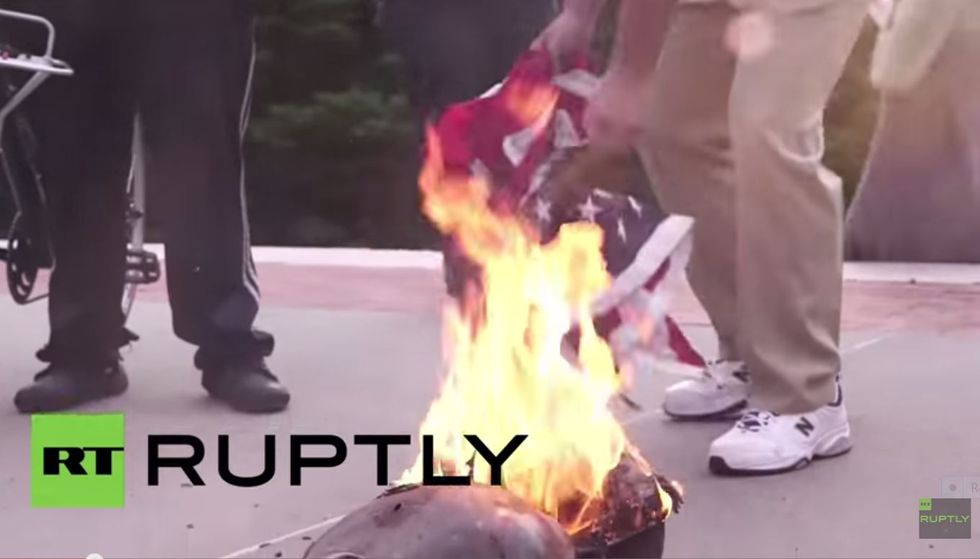 Chaos broke out in a Brooklyn, New York park when an anarchist group burned both the Confederate and American flags. Bystanders and counter-protesters angered by the event showed up to defend the stars and stripes.

The flag-burning protesters, from the anti-police brutality group Disarm NYPD, took to Fort Greene Park on Wednesday evening and placed the Confederate flag in a barbecue pit. But when they began burning the American flag, bystanders, veterans and a biker group aggressively intervened and violence broke out, according to the New York Daily News.

"They're losers looking for a few minutes of fame," John Carroll, who pulled the American flag out of the fire, told CBS News.

According to CBS, the group began burning the flag but moved when they noticed they were outnumbered by angry people.

Disarm NYPD said on their Facebook page that the flag burning was in response to the Charleston church shooting on June 17, in which suspected shooter Dylann Roof gunned down nine African Americans in a racist attack.

"We will set fire to this symbol of oppression - the American flags - and march to honor our brothers and sisters who have fallen in the long struggle for freedom. Rise up!" they wrote.

Videos from the confrontation show protesters and bystanders getting in shouting matches and shoving.

It's not the lofty outcome the group planned for. They said they wanted the event to start a conversation about structural racism in America.

We do not believe the ideals of America are anything to be revered. We are building something that will be much better than America. While the so-called patriots yell that we should just leave, we instead choose to dream.

One flag-burning protester, Amanda Meltzer, 24, was surrounded by angry people who swore at her, the Daily News reports. This caused her to react emotionally.

"They're not critically thinking about what that flag represents! It represents genocide, imperialism, and oppression," she told the Daily News.

Another video shows large men from the biker club Hallowed Sons storming in, and a middle-aged man rescuing the American flag from flames. "Burn this sh*t, f*cking traitors," one man says as he places the group's protest signs on the dwindling fire. "I didn't go to Vietnam to hear this."

Another shows a confrontation in which a young woman calls flag defenders "imperialist *ssholes," which ultimately leads to a scuffle.

Though most of the flag-burning protesters were chased off by the biker club, Animal New York reports that one, Jose LaSalle from a copwatch group, remained. Video shows the bikers swearing at remaining flag burners, devolving into a shoving match with LaSalle. Police separated the men.