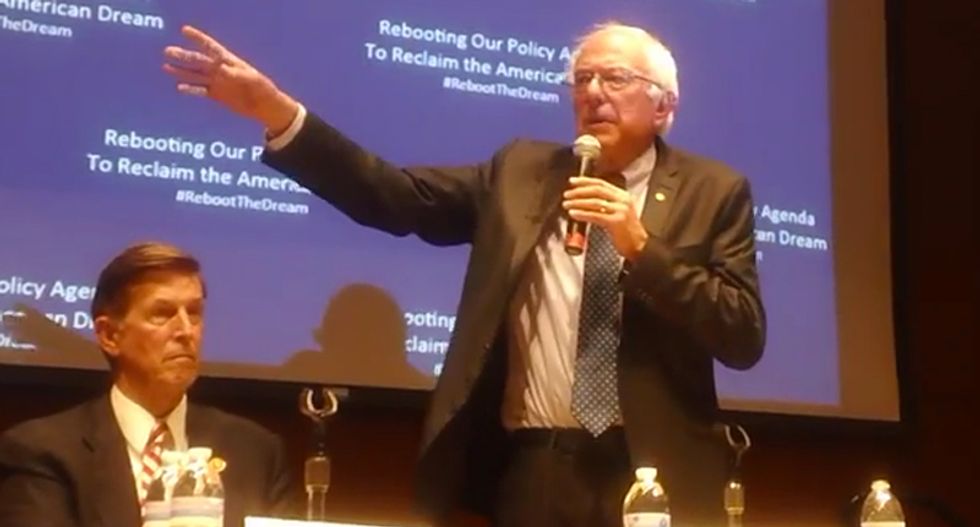 In what might be considered a bump in the road in an otherwise conflict-free run of campaign appearances by Sen. Bernie Sanders (I-VT), a gun control activist pressed the liberal senator on some of his comments and past votes on guns.

As reported by the New York Daily News, Sanders was speaking before a crowd in Arlington, Virginia when Honora Laszlo -- local chairwoman of Moms Demand Action for Gun Sense in America -- pushed the senator and 2016 presidential candidate to explain comments he made following the Sandy Hook massacre, when he claimed no legislation could have prevented the shooting that took lives of 26 people, 20 of them children.

Sanders explained that he represents a state filled with constituents who use guns for hunting, before admitting that guns are perceived differently by people in rural areas as opposed to urban environments.

"I understand that guns in my state are different than guns in Chicago and Los Angeles," He explained. "I understand, and the people of my state understand, that there are people all over this country who have guns who should not have guns."

Then Sanders went on to list votes he made calling for better background checks and banning assault weapons.

When pressed on laws he supported that protect gun manufacturers from liability lawsuits, Sanders wandered into what Lazlo described as "language that the NRA and their supporters use to polarize people."

“If somebody has a gun and somebody steals that gun and shoots somebody, do you really think it makes sense to blame the manufacturer of that weapon?” Sanders said. “If somebody assaults you with a baseball bat, you hit somebody over the head, you’re not going to sue the baseball bat manufacturer.”

Sanders added, “There’s going to have to be some compromises on both sides. So I don’t apologize for that vote."

Watch the video below uploaded to YouTube by lowkell: