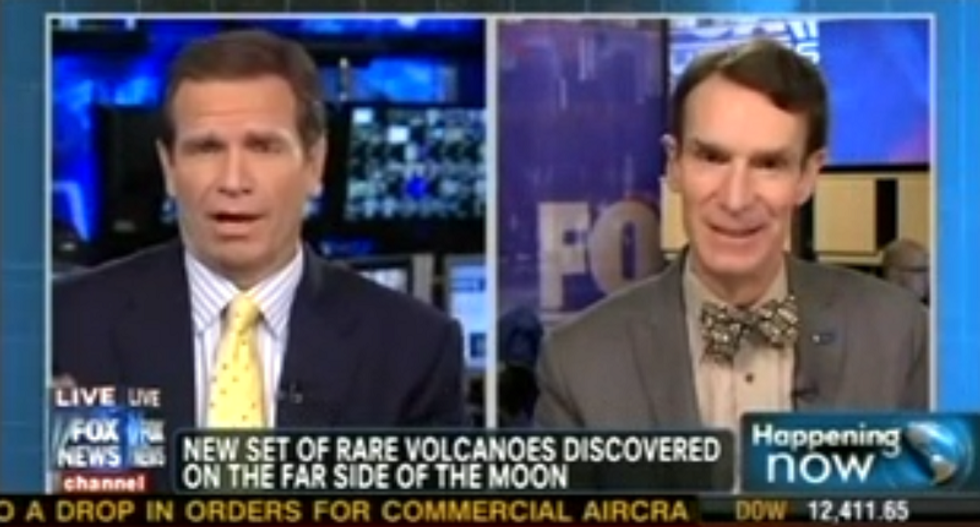 While discussing the moon with Fox anchor Jon Scott in 2011, Bill Nye "The Science Guy" found himself  giving a lesson in basic science.

Scott seemed to think volcanic activity is somehow connected to climate change, which is being caused by human activity like burning fossil fuels and radically increasing the level of carbon dioxide in the atmosphere.

"Does it go anywhere close to the climate change debate that's underway here on Earth," Scott asked. "If the moon had erupting volcanoes a few years ago -- a few million years ago, however you want to put it...It's not like we've been up there burning fossil fuels." F

"Billion," Nye corrects him. The volcanoes were active 3 to 4 billion years ago, according to scientists.

Nye then corrected him that there was no connection between fossil fuels, climate change and volcanoes.

"Volcanoes are not connected to the burning of fossil fuels, Nye says patiently.

He went on to explain that scientific principles on other planets and celestial bodies are consistent. Science about climate change is as consistent on Venus as it is on Earth and geology on the moon is also consistent with geology on Earth.

He then explained the algebraic equation that dictates surface area in relation to mass as an explanation for smaller objects cooling faster than bigger ones.

"The moon is a lot smaller, and so it cooled off faster. And this is all science, this is all true," Nye said. "And the great thing about science is... it's true for all of us. You can run the test, I can run the test and we try to get the same results. And if we don't then we find out why."

He then discussed the orbiter that discovered the volcanic region on the far side of the moon known as the Compton-Belkovich Thorium Anomaly. The region is a small complex of volcanoes that were active when the moon was relatively new.

"The great thing too is that even with the shuttle fleet parked we are still exploring space in some ways," Scott said.

He tried to sign off but Nye was able to interject and again correct him as Scott talked over him.

"About the shuttle fleet," Nye says, "you can't move on until you retire them. Retiring the shuttle's good."