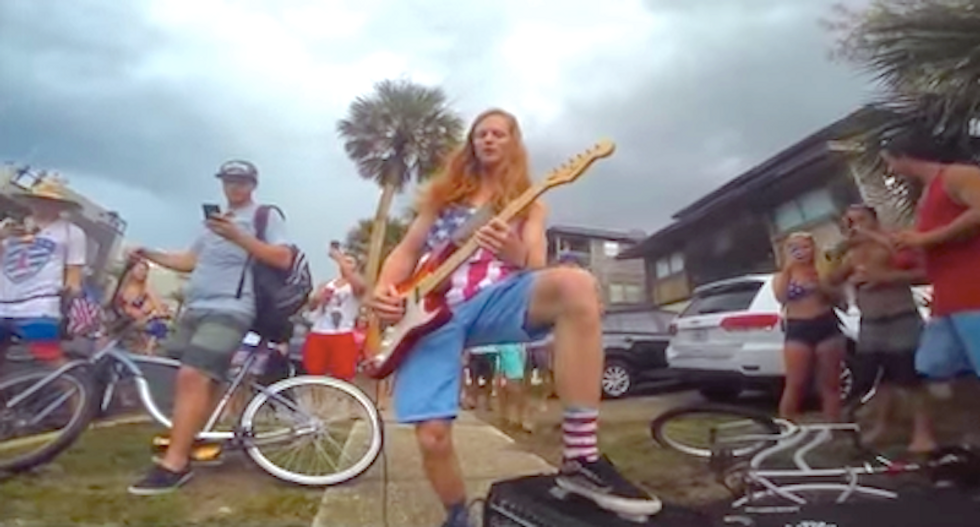 Police arrested a Florida musician after he finished playing the national anthem on his guitar during a Fourth of July celebration.

Lane Pittman is seen on a YouTube video performing a Jimi Hendrix-style version of the “Star-Spangled Banner” while decked out in a sleeveless American flag T-shirt and wearing red-and-white striped socks.

About 200 people gathered about 3 p.m. Saturday along the beachfront street in Neptune Beach to watch the 22-year-old musician, reported WJXT-TV.

The crowd sang along as he played the anthem, and Pittman briefly segued into Ted Nugent’s “Stranglehold” before officers approached.

Pittman put away his guitar and followed the officers, who placed him into handcuffs and drove him to the police station.

“Out of respect for the national anthem, they let them finish,” said Chief David Sembach, of Neptune Beach police. “He was told he was going to have to stop playing. He went to the sidewalk and continued playing, and it was only after that that the crowd was getting hostile -- so the only way to stop it, since he wasn't going to stop playing, was to take him out of the location.”

Pittman said he tried to explain that another officer had given him permission to play if he stayed on the sidewalk, but he said police were rude and refused to tell him why he had been taken into custody.

The musician was charged with breach of peace, a misdemeanor offense, and given a notice to appear in court.

Pittman said police threatened to charge him with inciting a riot and jail him overnight, but he said they told him they lacked the resources to take him to the Jacksonville jail.

The police chief said the video posted online was misleading, and he said officers never gave Pittman permission to perform – and instead told him he was not allowed to play.

Semback said he suspects Pittman, who plays in his church’s band and coaches high school lacrosse, was engaged in a publicity stunt to boost his chances at becoming the Jacksonville Jaguars’ next mascot.

The crowd can be heard chanting “Jaxson de Ville,” the name of the NFL team’s mascot, as Pittman performs in the video.

Watch video of the incident posted online by Lane Pittman: