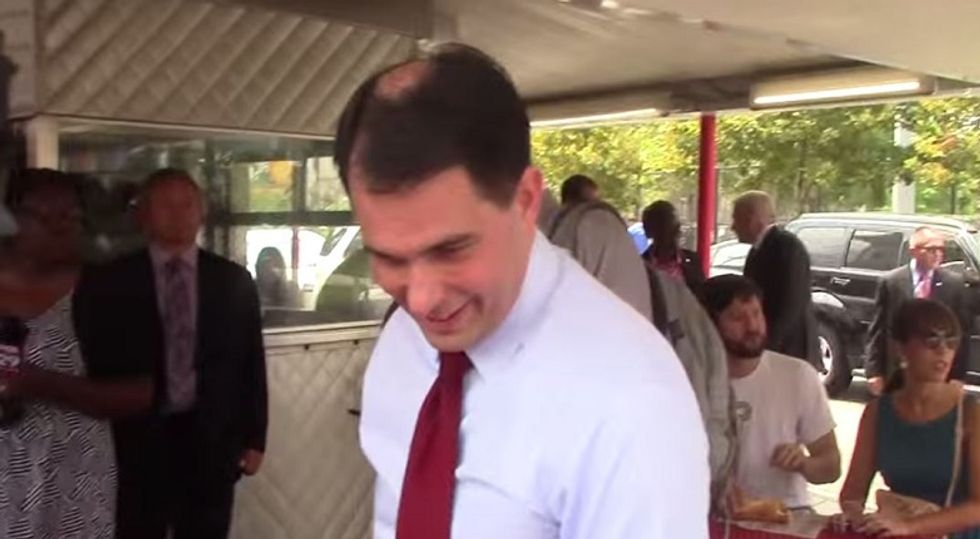 Scott Walker's campaign pit stop at a Philly cheesesteak house went awry Tuesday when he was relentlessly heckled and trolled at the restaurant and online.

At his stop at Geno's Steaks, a restaurant known for demanding customers order in English with a sign that reads, "This is AMERICA: WHEN ORDERING PLEASE 'SPEAK ENGLISH," two protesters stood outside with lewd signs, according to Business Insider.

A man can be heard telling Walker, "You suck" and another shouting the name of a rival, Bernie Sanders, I-Vermont.

These weren't the only setbacks for the Wisconsin governor and GOP presidential hopeful at his Philly stop. Walker was also criticized for cutting the lines and ordering the traditional meal poorly.

@ScottWalker You get wizz or provolone, you don't know how to order a cheese steak and you fail at pandering.
— Ricky Lifschitz (@Ricky Lifschitz) 1438109570.0

And if that wasn't enough, Walker apparently left a mostly-uneaten sandwich at his next stop, Pat's, along with trash, on the table.

According to Philly.com, Walker's spokesman responded to the misguided tour faux pas, saying the owner at Geno's ushered him to the front of the line. And Walker left his food on the table at Pat's in order to schmooze, but took it with him when he left the restaurant.