42 splices and counting: Here are 9 facts about the Planned Parenthood smear campaign you need to know 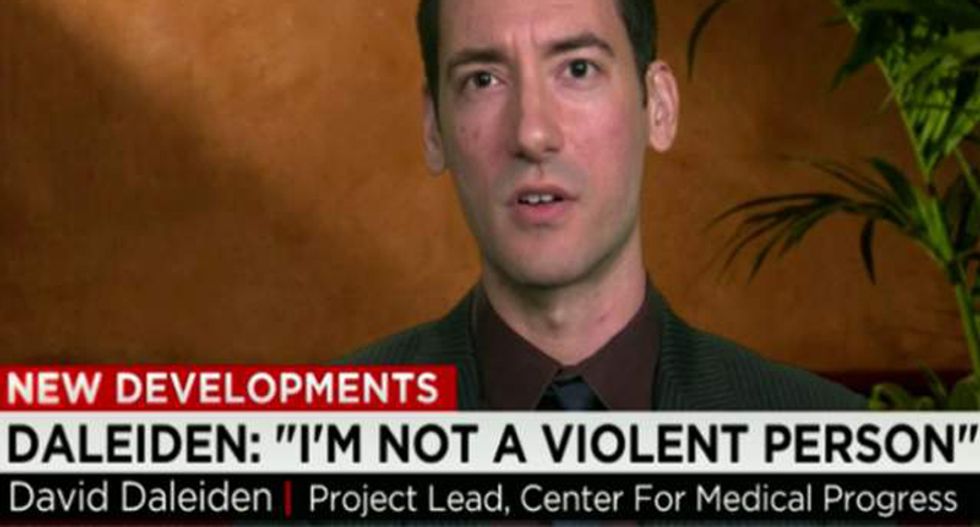 Imagine that someone hated you (or your company) and wanted to make you look bad. So, he pretended to be a friend or colleague, went to your events, repeatedly asked you to meetings or lunch, gained your trust, and then spent two years recording private conversations. Could he find stuff that would make you sound like a heartless monster? If you’re like me, the answer is a resounding yes. In fact, there’s no way it would take years.

Like me, you probably can think of five things you said in the last week that you would cringe to hear on the evening news. But would a selectively edited patchwork of your worst (or most easily misinterpreted) moments accurately reflect who you are? Almost certainly not.

The scraps of conversation with Planned Parenthood employees that were recorded and released by fundamentalist Christian David Daleiden and his front organization, the Center for Medical Progress (CMP), sounded shockingly nasty. But as details of the smear campaign emerge, we probably should be surprised that they didn’t sound worse.

Here are nine facts that put what you heard in context:

42 Splices – According to forensic analysis by Fusion GPS, the first five videos released by Daleiden and CMP, contained 42 splices where sentences were cut and patched to create the appearance of a seamless conversation. By design, these edits changed the meaning of individual sentences as well as the overall conversation. In one example, a Planned Parenthood staffer’s comment about lab protocols was edited to sound like she was talking about abortion procedures. Her words got echoed repeatedly by mainstream media who falsely assumed they knew what she was talking about.

Contradictory Evidence Omitted - In a Colorado interview, a Planned Parenthood employee said 13 times that all fetal tissue donations must be reviewed by attorneys and follow all laws. All 13 times were omitted.

Edits in “Unedited Videos” - The “unedited” videos released along with shorter excerpts were themselves edited, rendering them useless as evidence in legal cases or regulatory hearings.

Thousands of Hours of Recordings – To shock audiences and create the appearance of callous wrongdoing, abortion foes selectively released less than one percent of their recordings, compiling even smaller fragments to create viral videos. By Daleiden’s own report, CMP agents recorded “thousands of hours,” from which they selected the ten or twenty hours of (moderately edited) recordings to obtain a few minutes of (heavily spliced) inflammatory sentences.

Expensive Taxpayer-funded Investigations Find No Wrongdoing – A growing list of government committees in states including Massachusetts, Indiana, South Dakota, Georgia and Pennsylvania have now cleared Planned Parenthood of wrongdoing, and in California and Texas lawmakers have also called for investigation of fraud by the Center for Medical Progress.

Yuck Factor – Rather than seeking to expose wrongdoing, the campaign appears optimized to trigger a frenzy of disgust among religious conservatives, activating them for the upcoming campaign cycle. Research suggests that, in contrast to liberals (who base moral judgments primarily on questions of fairness and harm), many conservatives fail to differentiate between physical disgust and morality. Conservative campaigns leverage this fact. Homophobes wielded the “yuck factor” effectively for decades to block gay rights and are deploying the same strategy against reproductive rights. Repeated reference to fetal remains functions as a powerful arousal trigger for the Religious Right.

Gallows Humor - Because black humor is a way people deal with stress, CMP was virtually guaranteed to catch shocking “callous, inappropriate” comments if they recorded long enough. Gruesome humor is particularly common among soldiers, doctors, EMT’s, medical researchers, farmworkers, nurses and others who work around bodily fluids and death. One friend commented that her nurse colleagues will joke rudely about their patients at one moment and then will be crying for the same patients an hour later.

Letting Down – From a psychological standpoint, things we say and do in private (or among trusted, like-minded friends) are particularly vulnerable to being distorted by people with ill intent. That is because we rely on the other person to interpret any given statement within their experience of us. For example, after my bike is stolen, I can safely rant among friends about capital punishment for bike thieves only because my friends and family already carry the rest of the context: they know I oppose capital punishment. A Planned Parenthood employee joking about wanting a Lamborghini relies on the same unspoken understanding.

Not About Abortion – The CMP smear campaign was designed not to reduce abortion but rather to control who has sex, by heightening the threat of pregnancy and STI’s among young women. Secondarily, it was timed to feed Tea Party Republicans fodder for election campaigns . Since public dollars pay for no abortions, defunding Planned Parenthood would eliminate only their preventive care services, including birth control, with the ironic effect of driving up need and demand for abortion. It is part of a broader anti-birth-control campaign aimed at protecting biblical (Iron Age) family structures and gender roles.

Don’t be deceived: The religious conservatives behind the Planned Parenthood smear campaign have shown repeatedly that they are willing to harm women and families and even drive up abortions in order to control the sexuality of females and youth. This isn’t about their hatred of Planned Parenthood, the healthcare nonprofit, it is about their hatred of planned parenthood, with two small “p’s.” It’s about their hatred of the changes in society that allow young people to create the lives and families of their choosing, free from the biological constraints that for most of human history have made pregnancy the price of sex.

Speaking of young people, online youth collective, Ultraviolet, has done a little selective splicing of their own. They just released a video in which Sean Hannity interviews Deleiden about Mike Huckabee’s sale of fetal body parts. It is not to be missed: