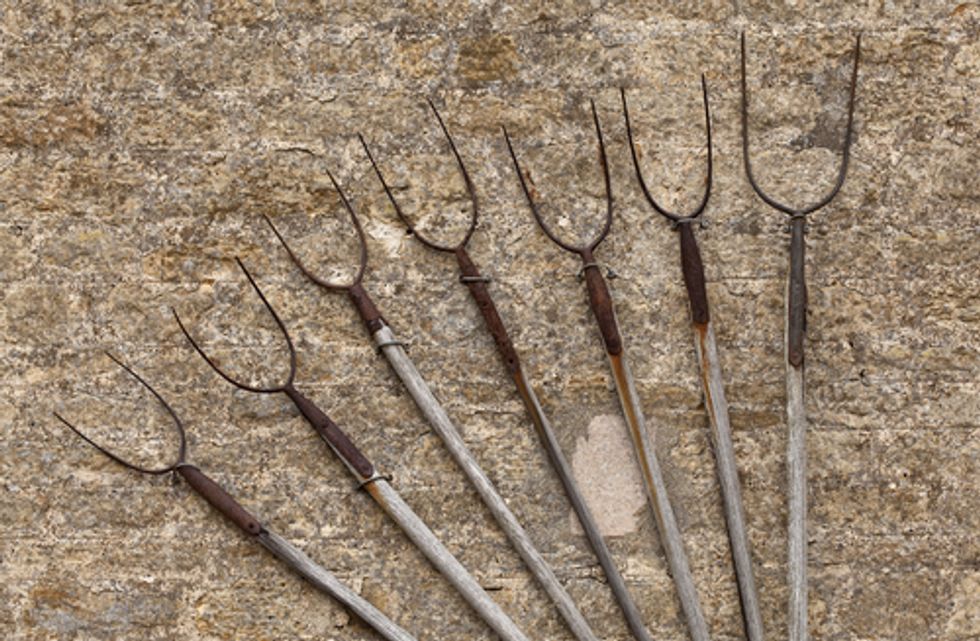 Grab your pitchforks, Breitbarters! There's a totally innocent person's life to ruin for no good reason!

While the left is hardly innocent of it, it's safe to say that the politics of personal destruction is far more central of a political strategy on the right. Part of that is because there's usually more ethical considerations for liberals in play. Doing things like outing people or making someone's biography a central issue requires some kind of justification on the grounds of relevance. Is the person a hypocrite? Does this actually speak to their credibility? If not, it's none of your business and move on.

But for the right, simply being a liberal is seen as reason enough to constantly target people for stalking and harassment. And we've seen an utterly shameful demonstration of that fact this week in the story of Shaun King, a Black Lives Matter activist that Breitbart targeted for one of the malicious "take out" attacks, based on extremely shady accusations that King had somehow faked being black. Clearly inspired by the Rachel Dolezal story, right wingers went digging and found that King, who is light-skinned, had a birth certificate calling both his parents white. This was held out as a smoking gun and somehow a reason to discredit King's activism and the entire Black Lives Matter movement.

From the get-go, it was clear this was bullshit. Dolezal became a spectacle in part because her story is a pretty unique one and it's obvious, to me at least, that she has some serious personal and familial problems that led to her strange choice to reinvent herself as a black woman. In addition, despite all the attention she got from the liberal media, you didn't really see anyone trying to suggest that her existence somehow disproved that racism is a problem or claiming that her activist choices, while self-interested, were somehow invalidated because of her deceit.

But that's what King's detractors wanted you to believe: That he is lying and ergo everything he cares about is somehow a sham. It wasn't logical, and that, to me, was reason enough to roll my eyes at it and  move on.

But you will not be surprised to find out that King is not a liar. After enduring days of abuse, he finally caved and fed people's curiosity, explaining something that seems embarrassingly obvious in retrospect: The man listed as his father on his birth certificate is not his biological father. If this shocks you, you better sit down because, it turns out, this isn't even that unusual a situation. Depending on where you live, about 5-15 percent of children born have a different father than the one listed on their birth certificate.

Clearly, race and identity and reproduction are complex issues, far more complex than ambiguity intolerant conservatives can probably handle. But what really bugs me about this is that here you have a bunch of people hounding this poor guy for days on end with demands for information that they probably should have known beforehand was going to be private and potentially embarrassing for his parents. Instead, they forced this guy into a corner where the only way to protect himself was to explain a very painful personal history that was none of our business. But are these bottom-feeders at Breitbart going to apologize for their behavior? Hell the fuck no! They are shameless monsters who are, you can guess, doubling down and blaming the victim with quotes like, "But if there was confusion about Shaun King’s race, it’s because he allowed it."

Hey, you fuckhead, try this on for size: If there's confusion about someone's race, why don't you move the fuck on and get a goddamn life? Why is it so fucking important to you to put someone in a box? What kind of derangement has gripped you that you can't handle the possibility that race, which is socially constructed*, might therefore not be as simple as black and white?

Adding to the grossness of this, the entire obsessive attack on King is about trying to discredit the Black Lives Matter movement. Just chew on that for a moment. This is about trying to derail a movement whose sole and only purpose is to stop unnecessary violence that is perpetuated because of unfair stereotypes about black people. What part of that movement is so fucking offensive to the right? Are King's detractors for violence? Do they think shooting unarmed black people is a social good? Do they think that the world is a better place when lives are lost for no good fucking reason? What the fuck? This is just an onion of evil, with each layer just making you sicker and sicker to ponder how truly terrible these fuckwads are.

Jill Filipovic has an excellent piece, which she interviewed me for, at Cosmo about Twitchy and the right wing hate machine. Reading it, it becomes clear that so much of what motivates the modern conservative movement is just straight-up sadism, a bully's desire to hurt and destroy for its own sake. That's why they went after King, because they thought he was a soft target and the pleasure of potentially destroying someone's life just drowned out all common sense and reason. It's not even about accomplishing political goals anymore. Destruction is being handed out for destruction's sake. The idea that some elderly woman who hasn't done anything to anyone has to have a long-ago heartache dragged out into the public eye should embarrass them. Instead, I'm guessing many of the Breitbart crowd are gleeful as fuck over it.

For shame. Truly, for shame.

*Ignore the headline on that post. Just because race is socially constructed doesn't mean it's not real, as anyone who is discriminated on the basis of race could definitely tell you.