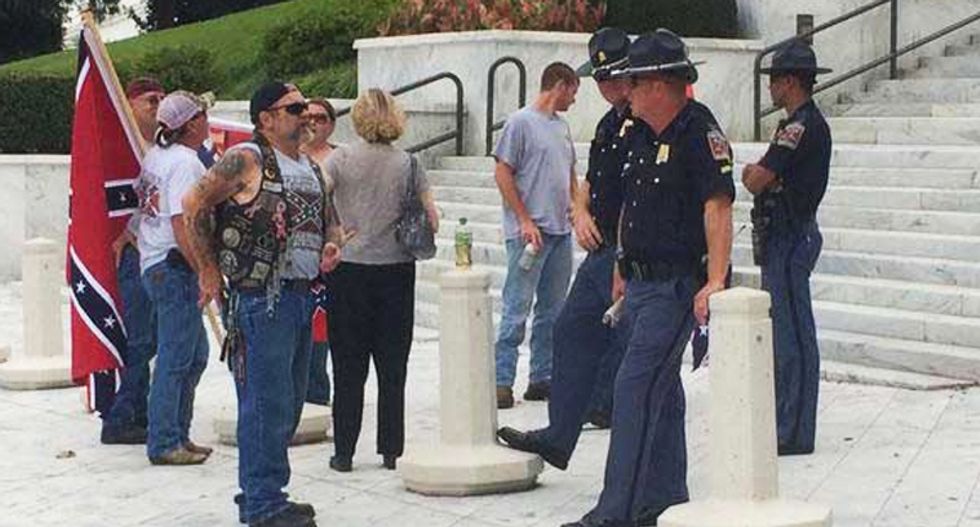 A 5-hour secession rally at the Alabama Capitol building in Montgomery was called off after two hours on Saturday when only about 30 people showed up - far short of the 300 expected by the rally organizers, reports the Montgomery Advertiser.

"This is really shocking me that these people aren't here," said puzzled event organizer Freda Mincey-Burton.

The event, which had been promoted on the Alabama Flaggers Facebook page, was intended as a call to arms for Alabama citizens who are "tired of being walked on."

The reality was something else entirely with approximately 30 attendees showing up, including the event organizers who had moved the rally to Saturday from Friday in the hopes of attracting a larger crowd.

Rally organizer Justin Burton admitted that the idea of secession might be frightening to some supporters.

"Getting the majority is the biggest obstacle," Burton said. "People don't understand secession and are scared. They don't know what is involved, and all they see is Civil War."

According to Mincey-Burton and her husband, they are not a radical or racist group. They see the removal of the Confederate flag by Alabama's governor as stripping them of their heritage.

"The Civil War happened, and there's not anything anybody can do to sweep it under the rug," Mincey-Burton said. "Taking the battle flag down, taking statues of Robert E. Lee down, that's like taking George Washington out of the Revolutionary War. This happened. Face it, and get over it."

Supporter Thomas Taunton defended the Confederate flag, saying: "It's not a slavery flag. It's not a racist flag. It's to represent our forefathers who died fighting for the Confederacy, and we stand beside them."

After a few brief speeches before the supporters who showed, the rally ended less than halfway though as a steady rain drenched the would-be secessionists and they straggled away.

Watch the video below from the Montgomery Advertiser: