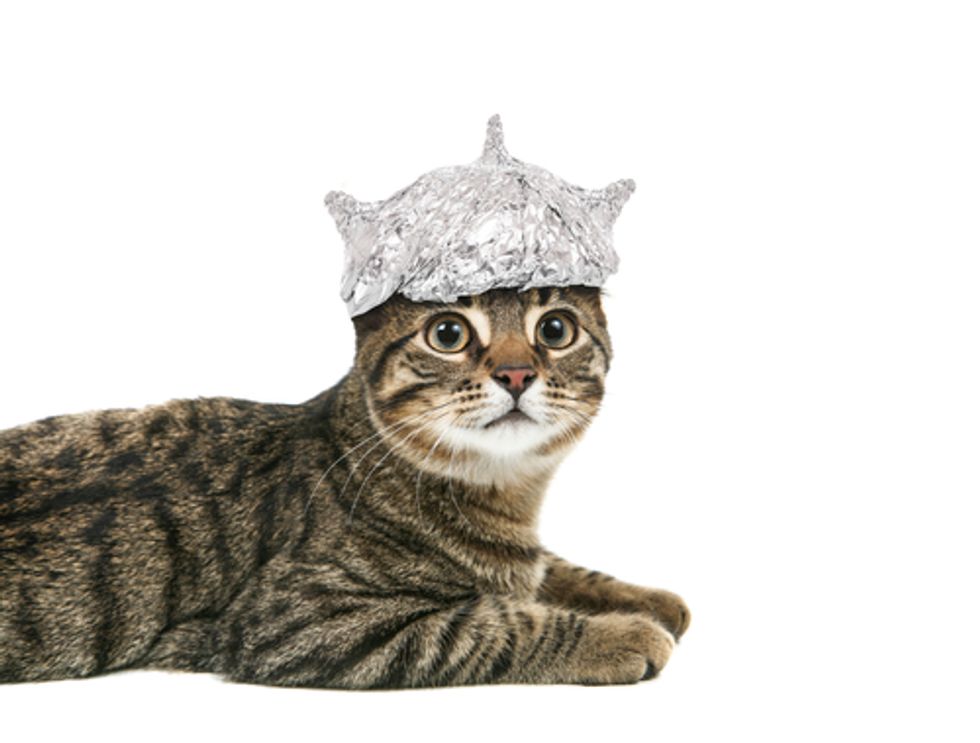 This cat is cute, but he also believes Planned Parenthood is trying to trick women into abortions to make money off them.

One of my ongoing aggravations with the media coverage of the abortion debate is the widespread inability to understand that the anti-choice movement is a bunch of Alex Jones-level wackos who believe in all sorts of lurid conspiracy theories that are just as ridiculous as the Jade Helm bullshit or the Obama birth certificate bullshit. If you get this, then it definitely helps slow you down and causes you to check your facts before running with an "accusations were made!" story about whatever conspiracy theory antis are floating about Planned Parenthood or any other reproductive health organization or technology.

This is not an exaggeration in the slightest. Look, for instance, at this one-pager on Planned Parenthood from the prominent anti-choice organization Students for Life. They are actually positing a conspiracy theory, an out-and-out conspiracy theory. Screenshots in case they take it down to hide what lunatics they are. 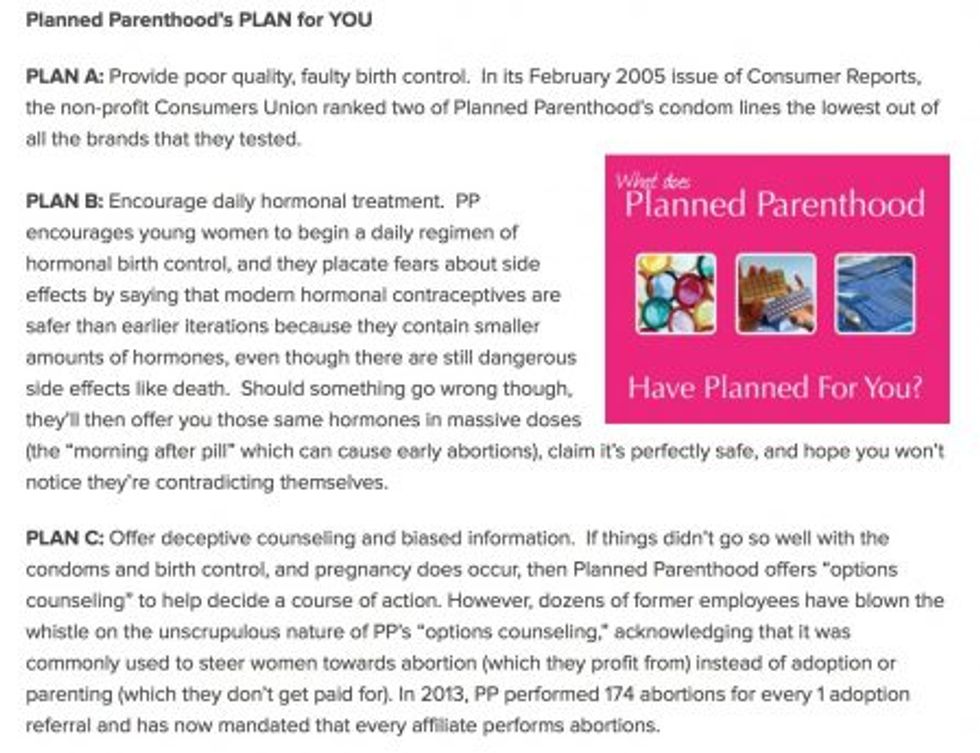 You can glean a lot about the psychology of reactionaries from this page. For one thing, there's the projection. They accuse Planned Parenthood of pushing faulty contraception in an effort to trick women into pregnancy. That's projection, because the anti-choice movement tends to rate a contraception's evilness on the basis of how effective it is. IUDs and birth control pills are the most hated because they're highly effective and female-controlled. Condoms, which people tend to use haphazardly---often because men whine and wheedle until their female partners give up and go without---are considered less bad, because they have a higher failure rate. The people trying to trick you into getting pregnant are antis, because they believe that sex is for pregnancy and will use any strategy they can, especially deceit, to try to make non-procreative sex harder.

The money stuff is also telling. A lot of what is going on here is conservatives tapping into the politics of resentment, particularly resenting people they think of as "undeserving" getting things like quality health care. That's what this community health center gambit is all about. It's a lot easier to go to Planned Parenthood for birth control, STI testing and well woman visits. Since they specialize in sexual health care, they can get you in and out of there a lot faster than a community health center usually can. The doctor or nurse you will see is likely to specialize, too, which is better for most women than seeing a general care doctor for these things. In addition, the waiting room will usually not be full of sick people who might be contagious, which is not true of a community health center. Basically, the reason to go a Planned Parenthood instead of a community health center is the same reason you go to your doctor instead of the E.R.

But these folks want it to be as big a hassle as possible for you to get birth control, so you give up trying. If you have to sit in a waiting room for three hours instead of half an hour, a lot of women will give up. And the possibility that you catch the flu because you had to sit next to a sniffling kid for that multi-hour wait just to get an STI test? Added punishment for you daring to have sex in the first place.

The fact that dumping a bunch of gynecology patients on community health centers will make the wait times even longer for those sniffling kids and their parents is probably also a bonus for many conservatives. Never underestimate the sadism towards low income people that fuels the conservative movement.

You can tell a lot about who, exactly, anti-choicers don't want having access to quality health care by who they claim is being "targeted" by Planned Parenthood. From this one-sheet: "According to our own research, 79% of Planned Parenthoods are located within 5 miles of a college campus." The idea is to spin this as predatory. In reality, what anti-choicers object to is college girls having access to quality sexual health care. What upsets them is that Planned Parenthood will not scold you or shame you for having sex. On the contrary, the college girls in question will likely be treated with respect and be given contraception and STI testing with an upbeat attitude that suggests, correctly, that young adults being sexually active is normal and nothing to be ashamed of. That is what pisses them off. This is about begrudging college girls good care, poorly disguised as "warning" them about it.

You see the same game being played with women of color. Whenever a Planned Parenthood goes up in a minority-majority neighborhood, antis lose their shit, screaming about "black genocide" and whatnot. It's all a cover story for the real agenda, which is making sure that women of color do not have equal access to quality care. Everything else is just noise.

None of this is hard to figure out or find if you just pay attention. Which is why it's so irritating to see anti-choicers being treated like reasonable people, when they are just John Bircher types screaming about fluoride in the drinking water and being pissed that people are allowed to use food stamps in "their" grocery story.

Arizona troopers have a new task as conspiracy theorists claiming Donald Trump won the 2020 election are fired up by the state's controversial audit.

"Gov. Doug Ducey has ordered Arizona Department of Public Safety protection for Secretary of State Katie Hobbs and her family after she received death threats related to the Senate contractor's ongoing audit of the November presidential election in Maricopa County," The Arizona Republic reported Saturday. "Jordan Conradson, whose Twitter account identifies him as an Arizona-based realtor and correspondent for the website Gateway Pundit, on Thursday posted a video of him walking behind Hobbs and shouting questions."