Anti-LGBT activist who was ditched for another woman wants $25,000 to promote 'pastor protection law' 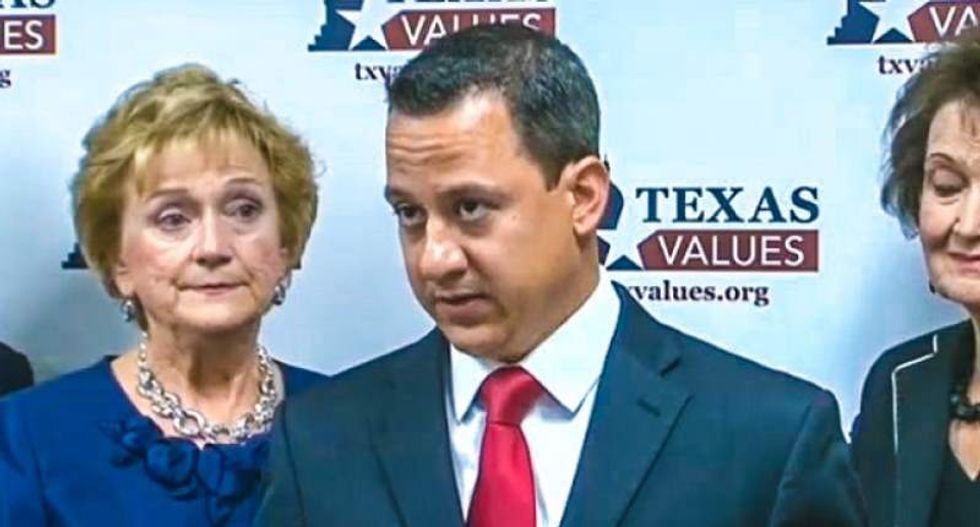 The head of an evangelical activist group in Texas is asking supporters to donate $25,000 so he can promote a law that has already been passed, Towleroad reported.

"America today is occupied territory," Texas Values head Jonathan Saenz wrote in a fundraising email. "The enemies of religious freedom occupy every power center from government to academia. Everyone [sic] except its spiritual core."

Saenz is seeking the money in order to inform more clergy members about Senate Bill 1065, which was signed into law by Gov. Greg Abbott (R) this past June. As the Texas Tribune reported at the time, the law allows pastors to opt out of marrying same-sex couples, and will go into effect on Sept. 1.

In his email, Saenz said pastors were "leaders of the resistance" in the state, and warned that the LGBT "occupying army" was out to identify "resistance leaders" and break their spirit. The funds would be used to inform state clergy of their right under the new law.

"This is why your pastor is truly in the cross-hairs [sic]," he wrote. "Armed with not only the recent egregious Supreme Court same-sex 'marriage' decision but a host of lower-court rulings and guidelines, the pro-homosexual left is scouring Texas -- America's last stronghold of resistance -- seeking 'weakest link' communities and churches for a pre-emptive strike."

Saenz made news last year after it was reported that his wife left him for another woman. He took over Texas Values six months later. He later complained that his ex-wife was allowed under the law to leave him "way too soon."

He has also accused LGBT activists of wanting to create "concentration camps" to punish bakers who would not want to prepare wedding cakes for same-sex couples.