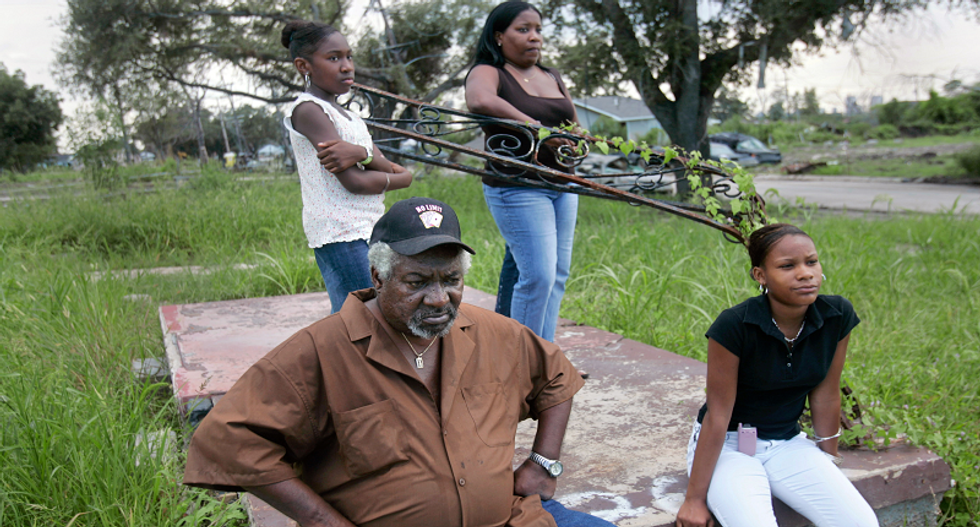 Cedric Brumfield sits with his daughter and granddaughters at the site of their home, decimated Hurricane Katrina, in the Lower Ninth Ward of New Orleans, Louisiana, August 27, 2006. REUTERS/Lee Celano

The columned facade of Pass Christian's city hall looks out over the Mississippi coastline to a refurbished harbor, a new yacht club and a bar where locals streamed in for sundown cocktails.

A few miles west, in the city of Bay St. Louis, tourists strolled through the colorful galleries, antique stores and cafes that dot its quaint main street.

Ten years ago this week, the eye of Hurricane Katrina ripped through these two small towns, which face each other across a small bay 60 miles (97 km) east of New Orleans.

The storm, the costliest disaster of its kind in U.S. history, caused some of the worst damage in the region here, leaving few buildings standing, killing dozens and forcing thousands to flee.

The appearance now is one of impressive regeneration, thanks in part to government grants that helped these towns and others nearby recover more quickly than some urban areas of New Orleans. Schools, churches and city buildings have been rebuilt and many residents have returned. Some areas are better than before the storm, locals say.

But behind the fresh white paint of the city buildings and the growing optimism, there are signs of persistent difficulties for these picturesque towns, which can no longer rely on government grants.

Deterred by insurance fees, businesses that once lined the Mississippi coast have moved inland. Summer weekend tourism is yet to fully recover, local officials said, and this has cost coastal towns much-needed revenue. While populations have swollen in the last 10 years, thousands of residents who left before the storm never came back.

"The challenges will remain for the rest of our lives," said Leo McDermott, mayor of Pass Christian. "It will never be easy street again." One block back from the flat sandy beach, away from the city hall complex that received $1.5 million in Federal Emergency Management Agency funding, the streets were largely deserted on a sunny afternoon this week. The city's population has bounced back to 5,000 from the 1,000 that stayed after the storm, but it remains 20 percent lower than pre-hurricane levels.

"People is the answer. We need more people walking around," McDermott said. Pass Christian sales tax revenue for the year ending Sept. 30 is projected to top $1.2 million, surpassing pre-Katrina levels for the first time since the hurricane and nearly three times what they were in the year after Katrina.

But it is a precarious existence: More than half those receipts come from one Walmart store, and sales tax makes up less than 20 percent of total city revenues.

Across the bay, Bay St. Louis Mayor Les Fillingame was optimistic about the future, but recognized that more infrastructure projects - and more money - are needed to bring the town fully back.

In all, more than half a billion dollars was spent on the city after the storm, from Federal Emergency Management Agency, the Army Corps of Engineers and the Department of Housing and Urban Development, Fillingame said. That includes a new gas and sewer system and the city's share of a two-mile bridge across the bay to Pass Christian that was rebuilt after the storm.

State and federal funding mostly stopped in 2012, leaving a void that the city is now trying to fill. Bay St Louis' projected revenue this year, above $7.4 million, is approaching the $7.7 million of revenues in 2004.

The harbor, which opened last year, houses yachts and sail boats, but more than a third of the slips are empty.

"Getting back to normalcy can be challenging," Fillingame said. "Things can be tight, but we are very much on schedule."

IT WILL BE BETTER

Few places reveal the contrast between progress and problems than the City of Waveland, just west of Bay St. Louis. FEMA described Waveland as "ground zero" for Hurricane Katrina.

Next to a newly built city hall and a business center, dozens of housing lots remain empty. Grass and brush have grown around old "for sale" signs, some of them offering reduced prices.

The whole region is littered with memories of what happened 10 years ago, and the possessions and the people that were lost. Damien Lawton, who grew up in Pass Christian, left before Katrina struck and never came back to live. He still works as a manager at Shaggy's, a popular seafood restaurant and bar in the harbor, overlooking the ocean.

During a conversation this week, Lawton pointed from the bar over to the beach where his grandmother's casket was found washed up after Katrina, uprooted from a nearby cemetery.

Despite the recollections, Lawton, like many others along this coastline, is mostly upbeat. He wants to look to the future now.

"It is getting there," he said. "It will take time. It will be better than it was."