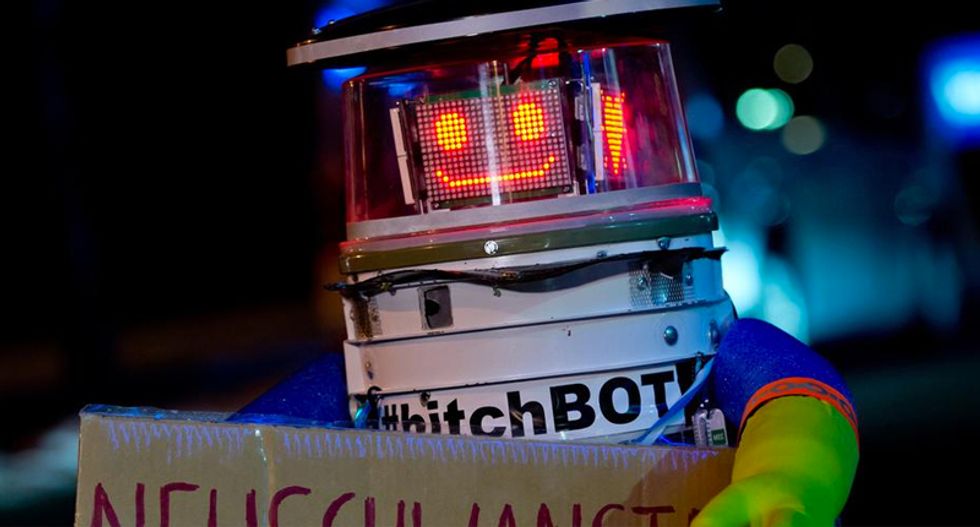 A hitchhiking robot that traveled across the expanse of Canada, Germany, and Norway without glitches lasted only two weeks into its sojourn across the U.S. before vandals in Philadelphia destroyed it, running off with its head.

According to The Star, the remains of HitchBOT were discovered in the streets of Philadelphia with its hitchhiking arms and head ripped off, and the head missing.

"Oh dear, my body was damaged, but I live on back home and with all my friends. I guess sometimes bad things happen to good robots! My trip must come to an end for now, but my love for humans will never fade. Thank you to all my friends," the creators of the cylindrical robot with the digital smile wrote on their website where they tracked the friendly robot's travels.

HitchBOT was the creation of Dr. David Smith, of McMaster University, and Ryerson University's Dr. Frauke Zeller, and traveled from town to town relying "on the kindness of strangers" in an experiment studying human/robot interaction.

"I am a free-spirited robot who wants to explore the world and meet new friends along the way. I am an avid instagrammer and tweeter. On my downtime, I can appreciate a good game of trivia and would never pass up any opportunities to bake desserts," is how the robot was described on the creator's page.

However two weeks of traveling in the U.S. found the robot destroyed in the City of Brotherly Love, leaving his fans disconsolate.

Whoever vandalized @hitchBOT in Philadelphia is a terrible, terrible person who will never amount to anything. IMHO. http://t.co/IhKMcdwNtz
— Stan Muller (@Stan Muller) 1438526088.0

Canadian journalist Lauren O'Neill tweeted a photo of the destroyed robot on Saturday:

The traveling robot left behind 45,000 unhappy followers on Twitter.

Video of the creation of HitchBOT below including a comment from an American prophetically saying it would "never last here in the states":