Ben Carson: There's a 'war on what's inside of women, but not a war on women' 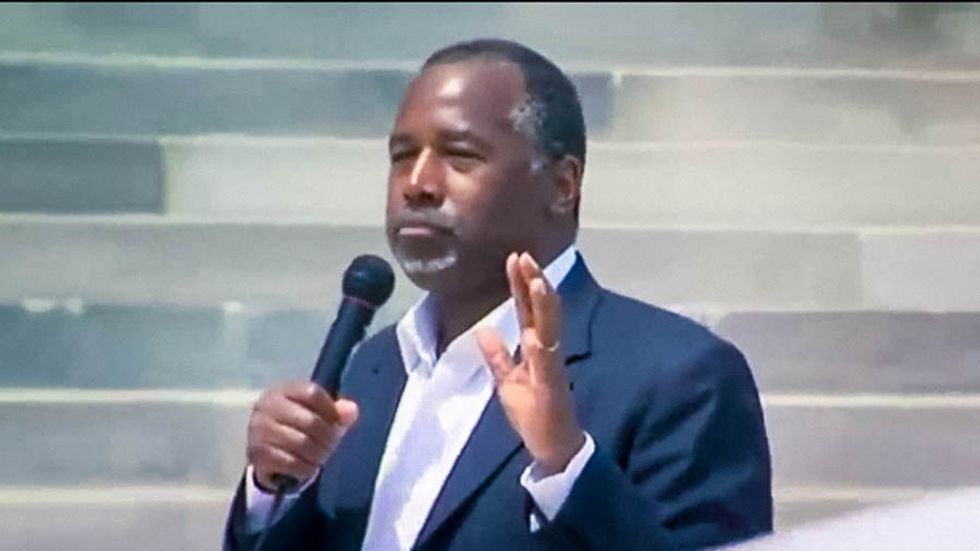 Republican presidential candidate Ben Carson said on Thursday that Democrats were wrong to allege Republicans were waging a "war on women," and that the real war was on "what's inside of women."

At a campaign event on the steps of the Arkansas Capitol in Little Rock, the candidate took a shot at leaders who "are always trying to stir up trouble" by driving "wedges" between people.

Carson argued that Americans should realize that "we are all in the same boat" instead of focusing on racism and sexism.

The candidate pointed to immigrants who came through Ellis Island and "worked, not five days a week but six days or seven days. Not eight hours a day, but 10, 12 hours day. No such thing as a minimum wage."

"But they worked not for themselves but so that their sons and daughters and their grandsons and granddaughters might have an opportunity in this land," he explained. "And hundreds of years before that, other immigrants came here involuntarily in the bottom of slave ships, worked even longer, even harder for less."

"But they too had a dream that one day their great grandsons and great granddaughters might pursue freedom and prosperity in this land."

According to Carson, rhetoric from the left was being allowed to "destroy this nation."

"If I was trying to destroy this nation and I was in charge, let me tell you what I would do," he opined. "I would drive wedges between the people. I would have a war on women and race wars and income wars and age wars and religious wars."

Because the United States was a nation of immigrants, Carson said that the country had a "stake in the welfare of every other nation."

"We are the natural leaders of the world," he insisted.