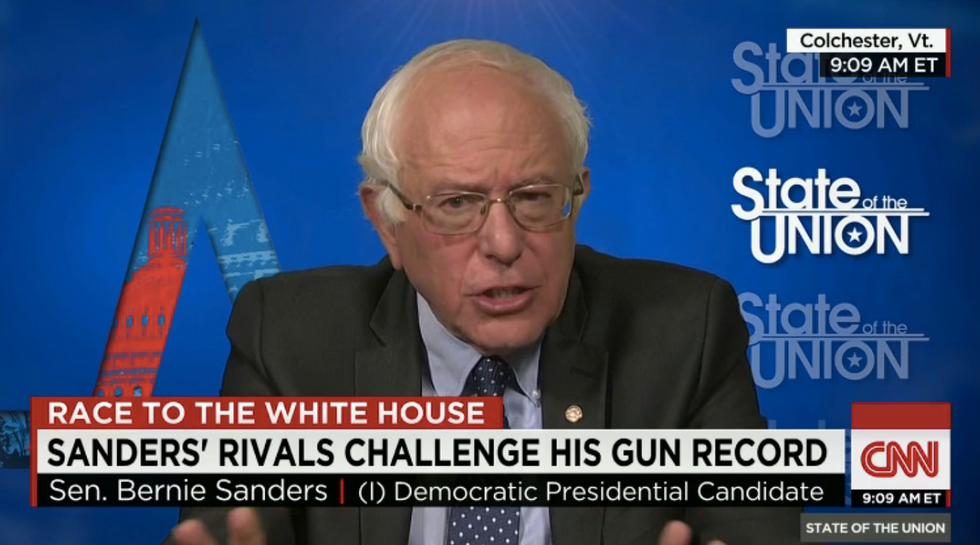 In a Sunday interview, Democratic presidential candidate Sen. Bernie Sanders (I-VT) said that he is the candidate who can "get beyond the noise" around the issue of gun control and pass meaningful legislation to make Americans safer.

The Hill reported that Sanders was appearing on CNN's State of the Union with Jake Tapper. Tapper said that Sanders' rivals are portraying him as weak on the issue of gun control.

“In fact, coming from a rural state that has almost no gun control, I think I can get beyond the noise and all of these arguments and people shouting at each other and come up with real constructive gun control legislation which, most significantly, gets guns out of the hands of people who should not have them,” he continued.

"Your Democratic rivals have been arguing that, when it comes to guns, you are out of step with liberal and progressive primary voters on the issue of gun control," Tapper countered. "A surrogate for Hillary Clinton, Connecticut Governor Dan Malloy, he went to New Hampshire and said that your gun votes had been driven by, quote, 'political expediency,' and that this is a dividing line between you and Hillary Clinton. Your response?"

"Well, let me tell you, I have, as I understand it, a lifetime voting record from the NRA of D-minus," Sanders replied. "D-minus. I voted very strongly for instant background checks. I want to see them made stronger, probably the most important thing that we can do."

SpaceX will apply for an exemption from US sanctions against Iran in a bid to offer its satellite internet service to the country, owner Elon Musk said on Monday.

"Starlink will apply for an exemption from sanctions against Iran," Musk said in response to a tweet from a science reporter.

A controversial group of right-wing sheriffs that has spread false claims about voter fraud in the 2020 election and propagated Donald Trump's Big Lie is now vowing to monitor this year's midterm elections through surveillance of drop boxes and a hotline for reporting purported election fraud.

The Constitutional Sheriffs and Peace Officers Association (CSPOA) supports the far-right fringe belief that under the U.S. Constitution county sheriffs have extensive power that supersedes all other federal, state or local authorities. It has recently partnered up with a Texas nonprofit called True the Vote, which has peddled conspiracy theories about voter fraud. Now the two groups are promising to keep on investigating allegations about a "stolen election" in 2020 and also to police future voting. For election authorities and voting rights advocates, the combination is ominous.

Whistleblowers were alarmed that the kingdom would use the technology for nuclear weapons and alerted Congress to the secret negotiations, resulting in a Congressional investigation. The White House did not cooperate with the investigation or share any requested documents.