Biden fans see him as honest and frank, in contrast to Clinton 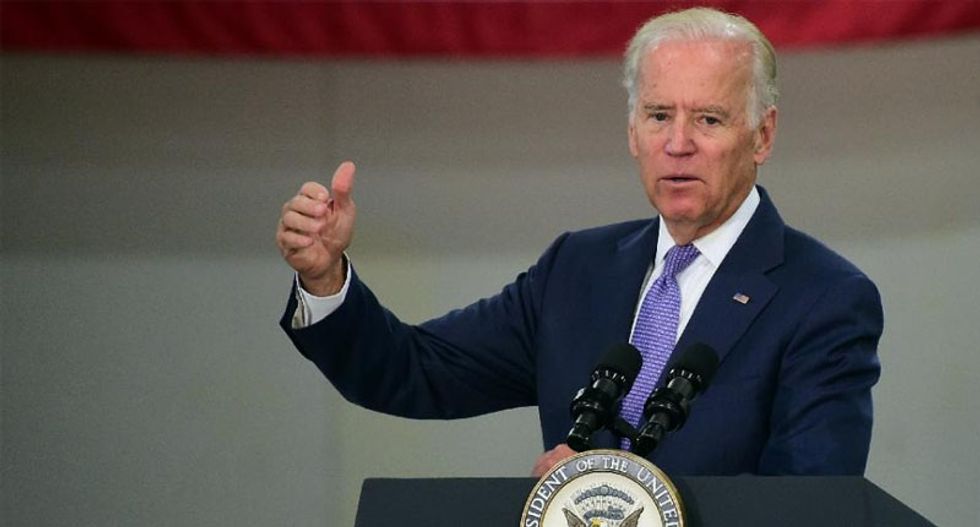 Often maligned for speaking too frankly, Vice President Joe Biden’s reputation for shooting from the lip might be one of his biggest weapons if he does decide to run against Hillary Clinton for the Democratic nomination in the 2016 U.S. presidential election.

Voters in a Reuters/Ipsos survey who said they were open to backing Biden for the nomination described him as an honest and forthright political veteran who is free of scandal despite decades in Washington.

Those perceived attributes could give Biden an edge over Clinton, whose "trustworthy" poll numbers have dropped as she struggles with perceptions that she has not been completely open about her use of a private email account for official business when she was secretary of state.

Clinton says she did nothing wrong and only used the private account because of convenience. The FBI is now investigating the security of the private server and any classified information on it.

Reuters spoke to 22 of the poll respondents who said they would support Biden. More than half used words like “honest,” “genuine” and “trustworthy” to describe why they like the former senator.

While many opinion polls have been throwing Biden's name into the mix for some months, few have examined the reasons for his relative popularity among many Democrats.

His fans appear willing to overlook the 72-year-old's tendency to commit gaffes, which would be a handicap on a presidential campaign.

"He says what he means. It’s not always good, but he’s upfront and honest," said Mary Lampron, 70, of North Providence, Rhode Island. “Maybe it’s not what he should say, but it’s what he thinks, which I admire,” she said.

In 2012, Biden surprised his boss, President Barack Obama, when he said he was "absolutely comfortable" with gay couples getting married, forcing Obama to publicly declare his own support for same sex marriage.

Eleven of the 22 poll respondents interviewed mentioned what they saw as Clinton's lack of transparency, or controversy surrounding her, as a mark against her candidacy.

According to Quinnipiac polls, 64 percent of voters surveyed in August said Clinton is not honest and trustworthy — up from 54 percent in April.

"I don’t support her because her credibility’s been in question. That’s the main issue. I don’t trust her," said Icie Farnsworth, 53, a lifelong Democrat from Martinsville, Virginia, who said she liked Biden's voting record on the economy, civil rights and education.

Last month Clinton blamed a "constant barrage of attacks that are largely fomented by and coming from the right." "People should and do trust me," she told CNN in an interview.

Biden has not said whether he will run for president, but speculation grew at the weekend that he may soon challenge Clinton for the Democratic nomination when he met with Senator Elizabeth Warren, a power broker among liberals.

It is late in the nomination contest and Biden is still way behind both Clinton and liberal Senator Bernie Sanders.

Only 13.3 percent of 690 Democrats in the Reuters/Ipsos online survey backed Biden while 47 percent supported Clinton and 24.9 percent were for Sanders, who has been attracting much larger crowds than Clinton.

All the same, the fact that Biden might be considering a run compounds Clinton's headaches.

"At a minimum, he definitely shakes the race up and makes Hillary’s path to the nomination arguably more difficult," said Democratic strategist Chris Kofinis, who is not working for any of the campaigns.

"People like him, people want to like him, he’s charismatic, and he’s got a very powerful personal story to say the least," Kofinis said.

Several people interviewed referred to Biden's son Beau, 46, who died of brain cancer in May. His death was another tragic chapter in the life of the vice president, who lost his first wife and his daughter in a car accident shortly after winning election to the U.S. Senate in 1972.

Though Clinton has wide policy experience, Biden's 36 years in the Senate and almost two terms as vice president count in his favor among supporters.

"I know she was first lady and has experience in the White House in that capacity, and I know she was secretary of state, but I think the experience he has is closer to what is needed for the presidency," said Dee Garletts, 72, of Bellevue, Washington.

Ruby Ellis, 74, of Lawrence, Kansas said she liked Biden because he was untainted by scandal. "He would just be a real refreshing person without problems behind him of any kind," she said.