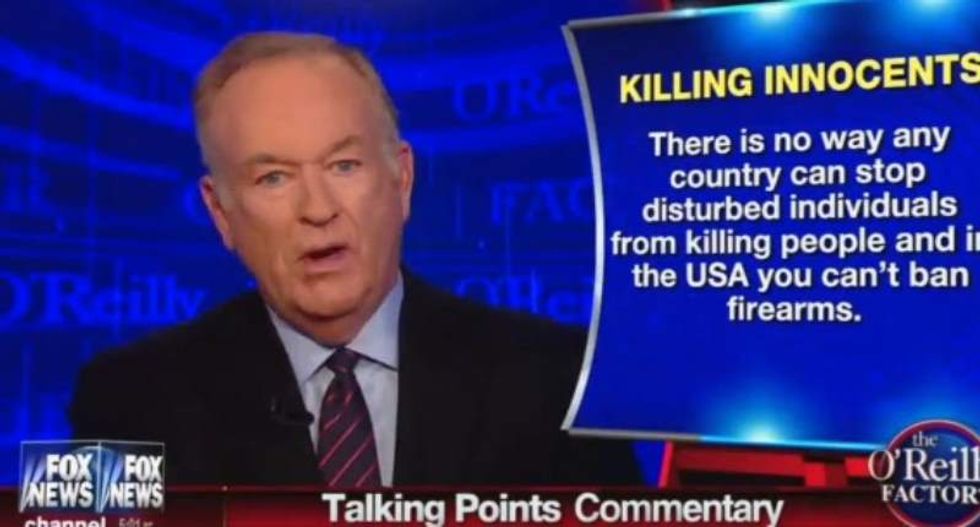 Fox News host Bill O'Reilly argued on Thursday that secularism was a contributing factor to the shooting deaths of Alison Parker and Adam Ward, as well as other mass shooting attacks.

"Individuals in this country now, I believe, are tending away from spirituality and into the secular-progressive 'It's all about me,'" he told Fox contributor Keith Ablow. "And when you combine that with a mental illness, you have what you had in Virginia yesterday."

Both O'Reilly and Ablow declined to include Islamic extremists like Islamic State in their arguments, with the Factor host calling their beliefs "a perversion of Islam." However, O'Reilly argued that a lack of spiritual beliefs leaves a person without loyalties or purpose, outside of their own gratification.

Psychotherapist Karen Ruskin pushed back on O'Reilly's argument, saying there have been cases where people who kill themselves or others do so despite having spiritual beliefs.

"Spirituality or non-spirituality does not mean you are mentally healthy or not mentally healthy," she said. O'Reilly cut her off, however, asking for specific cases. He did not mention that -- despite his protests at the time -- Norwegian mass killer Anders Breivik identified himself as "100 percent Christian" when he killed 76 people in 2011.

He also failed to account for conservative Christian Scott Roeder, who shot and killed George Tiller outside of his women's health clinic in Wichita in 2009. Jared Loughner, who killed six people while severely injuring then-Sen. Gabrielle Giffords (D-AZ) just two years ago, was also reportedly associated with Christian anti-abortion groups. And Vester Flanagan, who killed Ward and Parker, said in his "manifesto" that Jehovah told him to act.

While self-identified Christians have been responsible for several terror attacks, O'Reilly insisted that almost every killer on which he has reported on during his career has been a "nihilist."