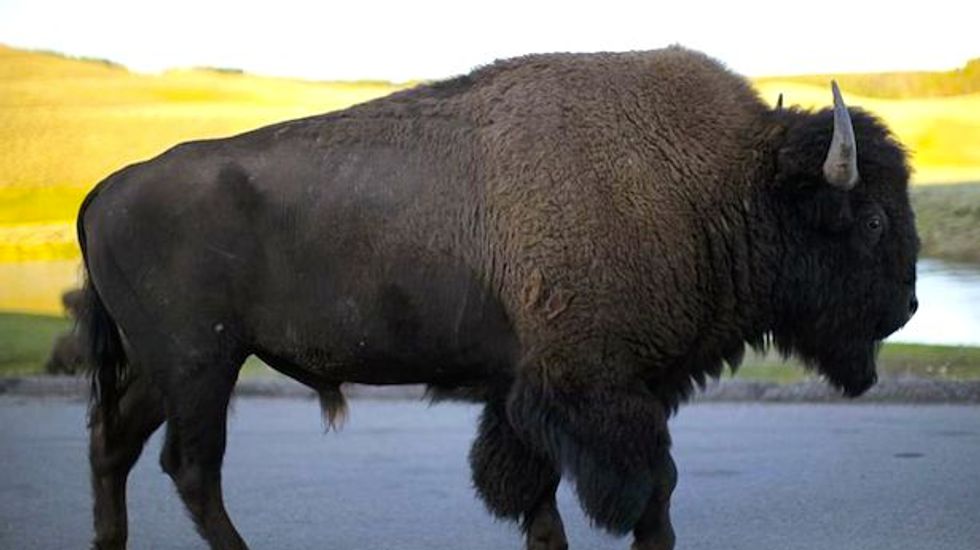 A bison gored a man working on an island off the Southern California coast, puncturing his lung and leaving him to stagger hundreds of yards until he found hikers who called for help, the spokesman for a conservation group said on Thursday.

The bison is one of about 150 of the large, horned bovine animals that live on picturesque Catalina Island, less than 25 miles (40 km) southwest of Los Angeles.

Christopher Baker, chief executive officer and president of the environmental group American Conservation Experience, was alone and working on a trail on Wednesday morning when he encountered the bison, said Matt McClain of the Catalina Island Conservancy, which cares for the animals.

"He's pretty experienced, so this is not someone who is out there and doesn't understand animals," McClain said. "I kind of suspect that this was one of those crazy accidents."

The bison was one of a handful of the animals that made it past a fence used to keep the herd on one side of the island, McClain said. Baker suffered bruises, as well as a punctured lung, McClain said.

Baker walked at least a quarter-mile (400 meters) until he reached two hikers who called for emergency assistance, the spokesman said.

Chris Reade, a spokesman for the Los Angeles County Fire Department, said a person he declined to name was airlifted to a Los Angeles-area hospital from Catalina Island and was in stable condition when transferred.

A representative from the American Conservation Experience did not return calls.

Baker is expected to survive, McClain said, and the conservancy has no plans to do anything to the bison which injured him.

Unlike bears, bison are not predators so an attack on a person is not an indication the animal is more likely to attack humans in the future, he said.

Bison are believed to have been brought to Catalina Island in the 1920s for a film production. The animals that were left there proliferated until they grew into a herd that at one time numbered in the hundreds.