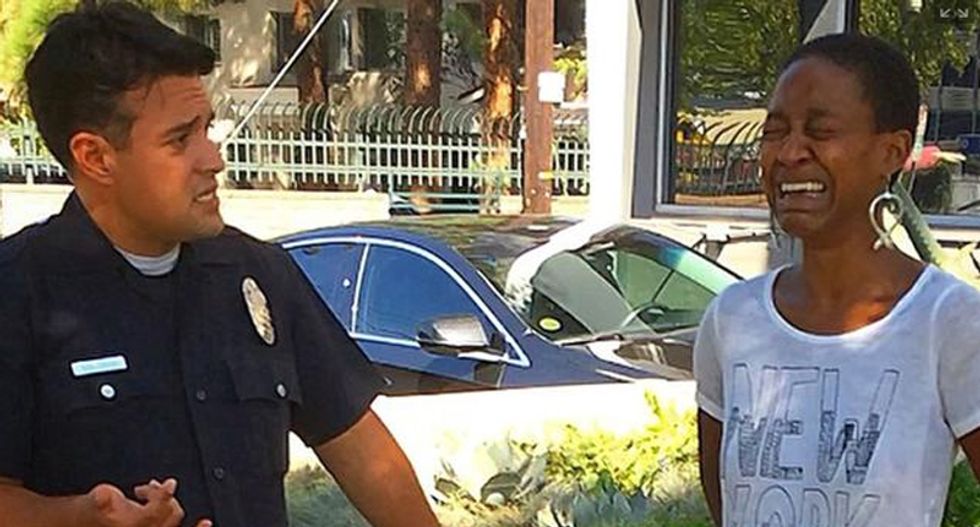 A black actress and her boyfriend who both accused an LA cop of being a racist last year after he questioned them, have been ordered to rewrite their apology letter to the officer as part of a plea deal for disturbing the peace.

Danielle Watts, who had a small part in Django Unchained, has until Aug. 26 to submit rewritten letters of apology after a judge and prosecutors rejected drafts submitted this week as insincere, reports the New York Daily News.

Watts and her white boyfriend, Brian James Lucas, made national headlines last year when they posted photos on Facebook stating they were harassed by Studio City police who accused her of being a hooker. Police had been called to the area after office workers observed the couple having sex in a car with the door open on a busy street in the middle of the afternoon. In Facebook posts by both Lucas and Watts, they claimed they were only "showing affection" which led police to interrogate the interracial couple.

Audio released by police at a later date showed Watts refusing to produce ID to officer Jim Parker and accusing him of racism as she stormed away crying.

According to authorities, early drafts of the apology letters avoid apologizing altogether, instead thanking Parker for his part in opening up a dialogue about interracial relationships.

"Looking on the brighter side, we do believe that the public discourse that surrounded our encounter was beneficial as it provided an opportunity for the public to discuss, and more deeply understand, the 'taboo' subject of interracial relationships," the letter said.

In an earlier draft Watts continued to blame Parker for escalating the encounter, writing, "Sgt. Parker, when you said sarcastically, 'Thank you for bringing up the race card. I never hear that,' I felt provoked because I had previously encountered many disheartening experiences related to ‘being black’ both in my personal life, and as reflected in society overall. Your willingness to dismiss my experience with sarcasm was hurtful, and caused me to respond defensively.”

Authorities have stated they want a real apology from Watts and Lucas, including the one they wrote to witnesses whom they accused of being judgmental, writing, "I feel deeply hurt and ashamed by your judgments, which felt unfair at the time, and provoked me to react to police presence in a heightened way — which may have further disturbed your working environment.”

Officer Parker, who has since retired from the force, said he is glad the court is forcing the couple to own up to their mistakes.

“I’m glad they have to do a rewrite. No more excuses. She needs to say she was immature and she messed up and that she apologizes for creating the whole conflict,” he said in an interview.