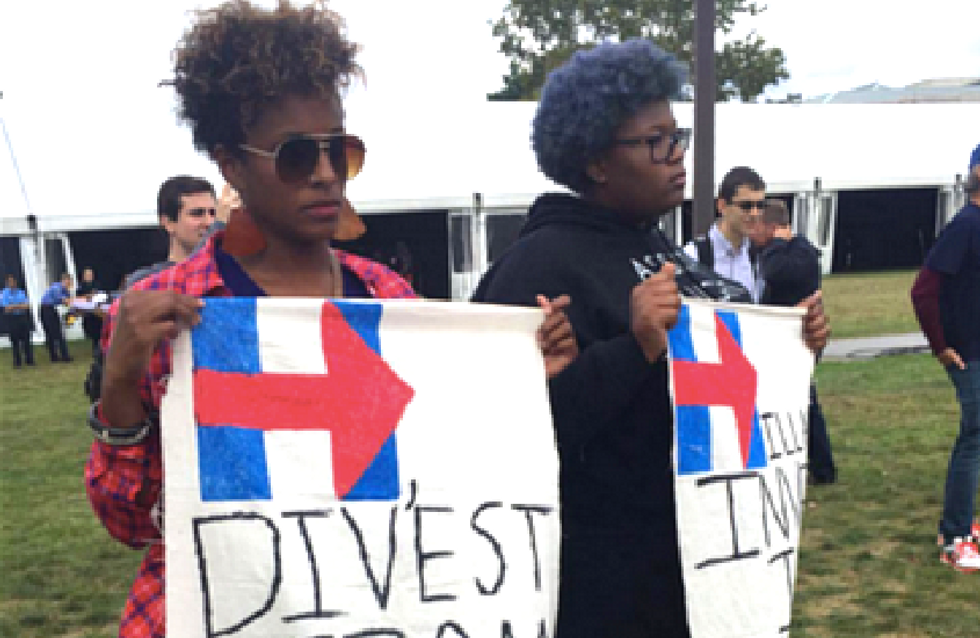 Democratic frontrunner Hillary Clinton's rally in Cleveland, Ohio on Thursday was interrupted by #BlackLivesMatter protesters who called on the candidate to acknowledge the recent deaths of multiple trans women of color.

According to Fusion, BLM staged the protest in conjunction with the GetEQUAL campaign -- a grassroots LGBT rights group -- to also demand that the former Secretary of State, New York Democratic Senator and U.S. First Lady to “divest from private prisons and invest in the liberation of black transgender women.”

According to a press release from the two groups, "The organizers interrupted Clinton’s speech in order to name the three black trans women who have been recently murdered in the state of Ohio including Cemia Dove, a black trans woman murdered in Cleveland."

Angela Peoples, one of the protesters -- and co-director of GetEQUAL -- said, "Bankrolled by private prison companies and lobbyists like Corrections Corporation of America and the GEO Group, Hillary Clinton is part of the system of violence that criminalizes and kills Black trans people -- how can we take her policy suggestions to curb mass incarceration and detention seriously while she’s accepting this money?”

As the activists disrupted her presentation, Clinton pointed to them and said, "I'll be happy to meet with you later, but I'm going to keep talking."

Fusion's Jorge Rivas wrote, "At least 20 transgender women have been killed this year, 14 of them black women. In nine of those cases, Fusion found last week, charges have been filed."

“Hillary Clinton must stand with Black people, especially Black trans women, by refusing to accept funds from or bundled by executives of or lobbyists for private prison companies -- and investing the money she’s already accepted from those companies in the work toward Black trans liberation,” said GetEQUAL's Rian Brown in a statement sent to Fusion. “Until that happens, we cannot for a moment think that Hillary believes Black Lives Matter.”