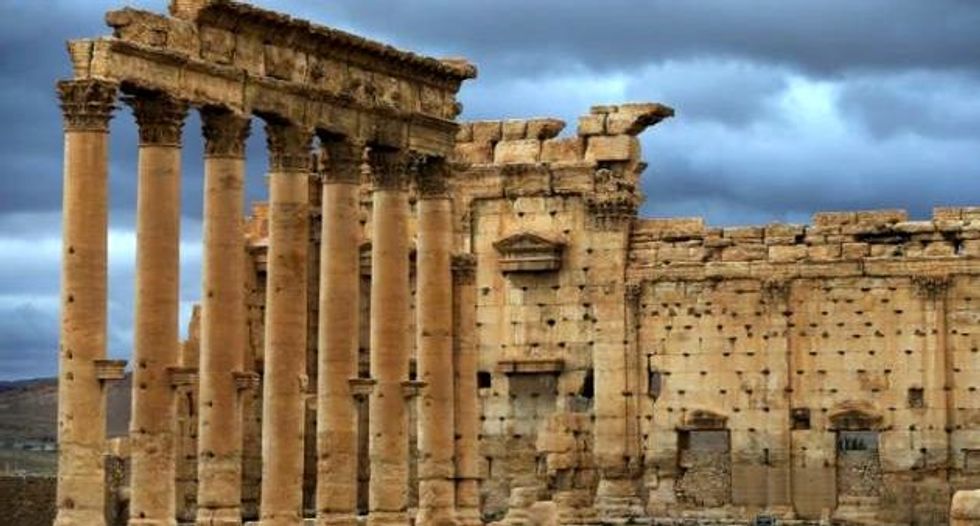 AFP/AFP/File - A view of the external courtyard of the temple of Baal (also written Bel) in the ancient Syrian oasis city of Palmyra, northeast of Damascus, pictured on March 14, 2014

A powerful blast in the ruins of Syria's ancient Palmyra raised fears Monday that the Islamic State group has damaged another of the Middle East's most treasured heritage sites.

Both Syria's antiquities chief and a monitor reported Sunday's explosion in the UNESCO World Heritage site, but there was conflicting information on the fate of its famed Temple of Bel.

IS destroyed the smaller Baal Shamin temple at Palmyra last week, confirming the worst fears about their intentions for the site, which they seized from Syrian regime forces in May.

The jihadists have carried out a sustained campaign of destruction against heritage sites in areas under their control in Syria and Iraq, and in mid-August beheaded the 82-year-old former antiquities chief in Palmyra.

The extremist group's harsh interpretation of Islam considers statues and grave markers to be idolatrous, but it has also been accused of destroying heritage sites to loot items for the black market and to gain publicity.

The Syrian Observatory for Human Rights, a Britain-based monitor, said late Sunday that IS fighters had set off explosives inside the 2,000-year-old Temple of Bel, at least partially destroying the centrepiece of Palmyra's famed ruins.

Mohammad Hassan al-Homsi, an activist from Palmyra, said the inner part of the temple was destroyed in the blast.

They detonated "boxes and barrels" that were filled with explosives and put in place on Sunday, he said.

"This was the most important temple for tourists and for the people of Palmyra. They used to hold festivals there."

But Syria's antiquities chief Maamoun Abdulkarim said the explosion did not appear to have damaged the temple significantly.

"The frontal columns and the cella (interior) of the temple do not appear to have been damaged," Abdulkarim said on Monday.

"According to the information we received from the town, the temple is still standing, but antiquities staff are not able to enter the site to see close up," he said.

- 'Most important' in Mideast -

"With this attack against a UNESCO-recognised archeological jewel... Daesh is persisting in its criminal determination to wipe out the cultural diversity in the Middle East," said foreign ministry spokesman Romain Nadal, using an Arabic acronym for the jihadist group.

There were no immediate images released by IS of the reported destruction.

The reports come a week after IS blew up the Baal Shamin temple, an act the UN's cultural agency UNESCO called a "war crime".

That destruction was first reported by activists and Abdulkarim and was later shown in photos released by IS.

IS captured Palmyra on May 21, sparking international concern about the fate of the heritage site described by UNESCO as of "outstanding universal value".

Known as the "Pearl of the Desert", Palmyra, which means City of Palms, lies 210 kilometres (130 miles) northeast of Damascus.

Before the arrival of Christianity in the second century, Palmyra worshipped the Semitic god Bel, along with the sun god Yarhibol and lunar god Aglibol.

Abdulkarim said the Temple of Bel was Palmyra's most important site.

"It is the best example of the combination of Oriental and Greco-Roman art styles," he said.

"Along with the temple of Baalbek in Lebanon, it is the most important temple in the Middle East. It is special because its different features are still intact.

"If its destruction is confirmed, it would be a huge loss not only for Syria, but for all the world."

Construction on the temple began in 32 BC and ended in the second century, and it later served as both a church and a mosque.

Before the Syrian conflict erupted 2011, more than 150,000 tourists visited Palmyra every year.

IS reportedly mined the ancient site in June before destroying the Lion Statue of Athena outside the Palmyra museum.

Most of the pieces in the museum were evacuated by antiquities staff before IS arrived, though the jihadists have blown up several historic Muslim graves.

IS has also executed hundreds of people in Palmyra and its surroundings, including several dozen soldiers in the city's ancient amphitheatre.

More than 240,000 people have died in Syria's conflict since it began with anti-government protests in March 2011.

The war has evolved into a complex multi-front fight involving the regime, rebels, Kurds and jihadists.

In Damascus on Monday, IS fighters battled Islamist rebels in the Qadam neighbourhood, bringing them closer than ever to the heart of the capital.

The fighting there began at the weekend, with IS seizing two streets in the area, the Observatory said.