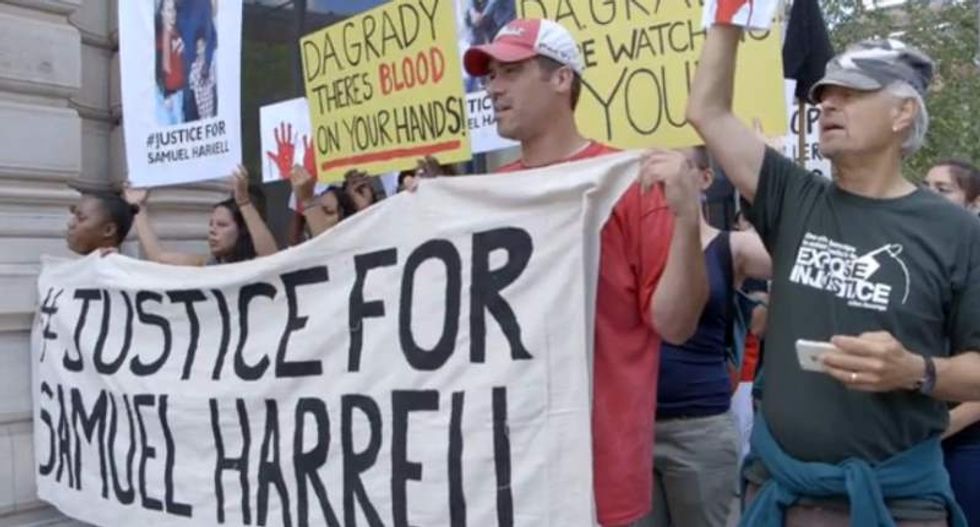 Demonstrators call for charges to be filed in connection with the death of Samuel Harrell on Aug. 27, 2015. Footage shot by Walter Hergt.

Black Lives Matter is seeking justice for a mentally inmate killed in April by 20 corrections officers known as the "Beat Up Squad" at New York's Fishkill Correctional Facility in New York.

One inmate who witnessed the beating said guards jumped on Harrell "like he was a trampoline" and dragged him down a staircase until his body was "bent in an impossible position."

A corrections officer told emergency medical crews that Harrell, who had announced he was leaving prison despite having several more years left on a drug sentence, had overdosed on a form of synthetic marijuana known as K2 and did not say he had been beaten.

However, an autopsy revealed Harrell had taken no drugs except an antidepressant and tobacco, and his cause of death was ruled a homicide.

“What is left to investigate? It has been four months," said Margaret Kwateng, of the Hudson Valley Black Lives Matter Coalition. "The autopsy ruled his death a homicide and there are 19 affidavits and letters documenting the fatal beating. If Bill Grady doesn't press homicide charges, he will not only be condoning the continued terrorizing of current inmates at the hands of a known gang of violent corrections officers, but condoning racist violence in prisons in general.”

The activists, some of whom were wearing paper "bloody" hands, marched through the city's business district carrying signs that showed Harrell's face and the names of the district attorney and the corrections officers involved in the inmate's beating death.

“He wasn’t just an inmate," said his sister, Cerissa Harrell. "He was a brother, son, grandson, uncle, nephew, cousin, and friend to so many people. Sam’s life was stolen from him."

The members of the "Beat Up Squad" all remain on duty as corrections officers, and inmates report that the guards are still committing acts of violence against them and warning them to “forget what you saw here if you ever want to make it home.”

None of the corrections officers have faced any disciplinary action for the beating.

Footage of the demonstration was shot by Walter Hergt, and can be seen here.