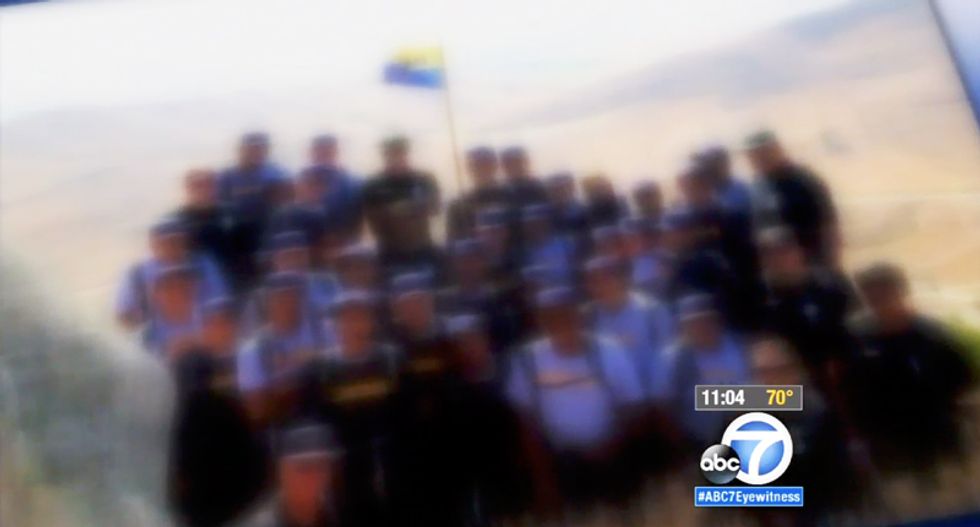 Four Los Angeles-area police officers have been arrested on charges of physically abusing minors who were attending a boot camp for at-risk youth in central California, a sheriff's office said on Wednesday.

The San Luis Obispo Sheriff's Office said the four officers were arrested following a two-month investigation into allegations of abuse on 13 youths between the ages of 12 and 17.

All of the juveniles came from the Los Angeles-area, about 200 miles (322 km) to the south, and were participating in a week-long program from May 17-24 at Camp San Luis Obispo, a California Army National Guard military base, the sheriff's office said in a release.

The sheriff did not give any details into the kinds of physical abuse the children were said to endure, but the Los Angeles Times, citing an attorney for the children, said it included the youths being slapped and punched, and having their hands and backs stepped on while they were doing push ups.

Two of the officers, Detective Marissa Larios and Officer Patrick Nijland, came from Huntington Park Police Department in southeastern Los Angeles. The other two, Officers Carlos Gomez-Marquez and Edgar Gomez, were from the nearby South Gate Police Department, the sheriff's office said.

The South Gate Police Department said in a statement it supports its officers and understands the danger they face, but takes allegations of wrongdoing seriously. Both officers have been placed on administrative leave pending the outcome of the case, the statement said.

The Huntington Park Police Department said it believes in complete transparency and takes the allegations seriously.

It was unclear if the four officers have obtained attorneys. They could not immediately be reached for comment about the allegations.

All four have posted $20,000 bond, the sheriff's department said.

The investigation included interviews with 37 participants at the camp, the sheriff's office said. It began in May after law enforcement received a report from the Los Angeles County Department of Children and Family Services who said several juveniles were alleging abuse while at the camp.

The children attended the Leadership Empowerment and Discipline Program (LEAD), put on by the South Gate and Huntington Park police departments. The camp is described in an online brochure as the premier local program for at-risk youth, or youth who might struggle to transition into adulthood, and their families.

The program has served hundreds of families since 1998, it said.

Watch a video report on this story below: