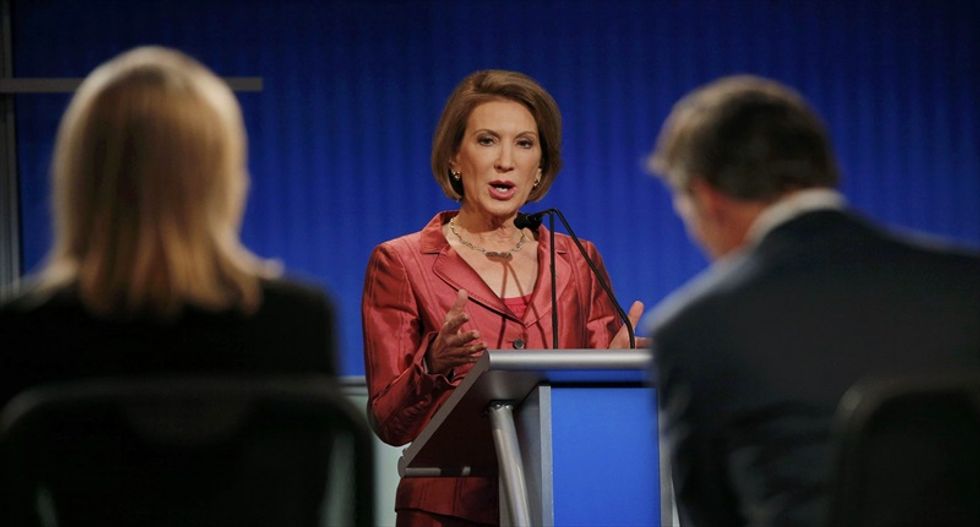 Republican Carly Fiorina moved fast on Friday to capitalize on a profile-raising debate performance, appealing to potential donors and urging grassroots supporters to open their wallets for her underdog 2016 White House bid.

The former business executive and only woman in the 17-strong Republican presidential field won rave reviews for a strong performance in the early debate on Thursday, out of the prime-time spotlight.

Fiorina's name spiked on Google searches and in Twitter references after she tangled with the six other Republican candidates relegated to the early show, away from the blinding media glare created by front-runner Donald Trump.

Republican activists and donors said Fiorina, whose campaign and allied Super PAC lagged in the Republican money chase with a combined $4.8 million raised at the end of June, should quickly see financial benefits from her performance.

"Nothing attracts money like success, and success in a debate is second only to winning Iowa and New Hampshire as you move into the early primaries," Republican fundraiser Fred Malek said.

Fiorina's campaign sent out two fundraising appeals touting her performance within hours of the debate's end, including one showing the 10 men who participated in the prime-time debate with the caption "What's wrong with this picture?"

Fiorina, whose support registered at less than 1 percent in a recent Reuters/Ipsos poll, urged attendees at a gathering of conservative activists in Atlanta on Friday to go to her website and sign up to donate "your treasure or your time or your network of people you deal with."

Fiorina's campaign declined on Friday to say if her performance had led to a spike in donations.

But Larry Sonsini, a California attorney and Fiorina donor, said he got several emails and three phone calls about her debate performance early on Friday, and he expected her donor base to start growing quickly.

"Name recognition is so important on the donor side," Sonsini said. "I can't help but believe that her coffers are going to expand."

The 60-year-old Fiorina was forceful and sharp in the Thursday debate, keeping her sound bites tight and on message while taking shots at both Trump and Democratic front-runner Hillary Clinton.

Kim Reem, president of the Iowa Federation of Republican Women, said a luncheon she attended on Friday was dominated by talk of Fiorina's performance.

"And even last night I went to a watch party for some friends for the second debate, and we sat there talking about Carly and her performance in the first debate. She actually won both" of the debates, she said.

The former Hewlett-Packard Co chief executive, who badly lost a 2010 Senate bid in California, told reporters in Atlanta she did not plan any big changes in her approach after the debate.

"I learned long ago that the most effective way to compete is to play your own game, and I've been competing with men my whole life," she said.