CBS host thumps Mike Huckabee: 'Has there ever been a modern debate won with a Nazi analogy?' 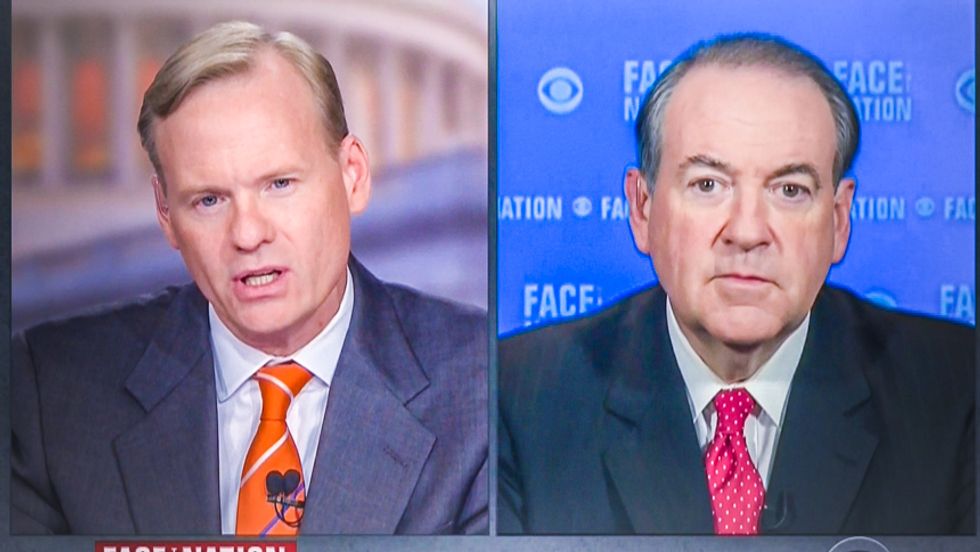 Republican presidential candidate Mike Huckabee admitted to CBS host John Dickerson on Sunday that he did not know of any modern debate that had been won by invoking Nazis.

In an interview with Breitbart News late last month, Huckabee had suggested that President Barack Obama's administration would trigger a second Holocaust by negotiating a nuclear deal with Iran.

"It is so naive that he would trust the Iranians,” Huckabee complained. “By doing so, he will take the Israelis and march them to the door of the oven.”

Dickerson began his interview with Huckabee on Sunday by asking if his hyperbole was elevating the debate.

"I want to know, has there ever been a modern debate where an argument was won by using a Nazi analogy?" Dickerson wondered.

"I don't know if a debate has been won," the candidate conceded. "But I know that we are in a very dangerous situation because of the deal with the Iranians. We just released $150 billion so they can buy conventional weapons from the Russians and can continue what is already a very deadly pursuit of terrorism around the world."

"We got nothing out of this deal, John. I read the whole thing," Huckabee insisted. "And my comments, while the president may have called them ridiculous, what's ridiculous is that we would ever trust the Iranians, who for 36 years have vowed that they will wipe Israel off the face of the map and have vowed that they will bring death to America and chanted it even during the negotiations."

Dickerson pointed out that the Obama administration has repeatedly said that it did not trust Iran, and that the deal was built on verification instead of trust.

"So I'm confused about how you say they do trust them," Dickerson said. "They have been saying they don't trust them at all."

Huckabee argued that the Obama administration must trust Iran or it would have demanded the right to inspect their military bases immediately.

"That's trust!" he remarked. "And that's the problem with this entire deal.