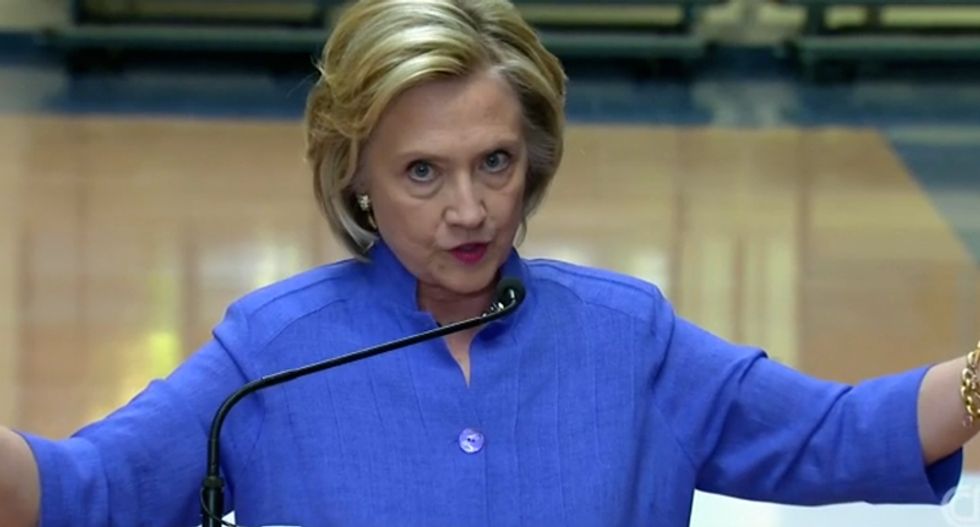 Related: Trump may say misogynist things, but other Republican candidates do them | Jessica Valenti

Hillary Clinton has seized on Donald Trump’s “offensive” and “outrageous” comments about Fox News anchor Megyn Kelly to condemn the broader field of male Republican candidates for president, casting herself as the enforcer of women’s rights on the campaign trail.

The Democratic frontrunner lambasted the real-estate mogul turned GOP frontrunner as “all entertainment” on Monday, saying that his apparent reference to difficult debate questions from Kelly stemmed from her menstruation deserved attention and that “the Republican party is going to have to deal with him”.

But Clinton quickly turned to a broadside against “radical and offensive positions” on women’s reproductive rights from establishment Republicans considered more likely to contest her in the general election, directly calling out Florida senator Marco Rubio for “offensive” and “troubling” comments on abortion.

“What a lot of the men on that stage said in that debate was offensive,” Clinton told reporters in New Hampshire after a town hall event introducing her plan to make higher education more affordable . “I don’t want people to be confused here about the outrageous comments by one, and just say we’re focused on this, and let the fact that there should be no exceptions for rape or incest go unnoticed or unmentioned. I’m not going to let that happen.”

During Thursday’s first Republican debate, Rubio said he has never advocated for abortions in the case of rape and incest – even though he has – and insisted “future generations will call us barbarians for murdering millions of babies when we never gave them a chance to live”.

Clinton, offering her first detailed response to the debate, called out Rubio specifically as Republicans fend off the possibility of a renewed “war on women” narrative that has haunted the party in the past.

“What Marco Rubio said has as much of an impact on where the Republican party is today as anybody on that stage, and it is deeply troubling,” Clinton said on Monday. “That is as offensive and as troubling a comment as you can hear from a major candidate running for the presidency.”

Rubio quickly fired back: “Hillary Clinton holds radical views on abortion that we look forward to exposing in the months to come,” the senator said in a statement.

Related: Donald Trump and the 'war on women': GOP confident mogul will lose the battle

Governor Scott Walker, who recently signed a restrictive 20-week abortion ban in Wisconsin , also opposes abortion without exceptions and has said voters agree, though polls tell a different story. Former Arkansas governor Mike Huckabee has said he would recognize the fetus as a person from the moment of conception, and called for endowing fetuses with constitutional rights.

“The Republicans are putting forth some very radical and offensive positions when it comes to women’s lives, women’s reproductive health, women’s employment,” Clinton said on Monday.

Since last week’s presidential debate, when Kelly pressed Trump on his history of sexist comments , he attacked the Fox News star for what he said was a hostile and unfair line of questioning. The following day, he implied on CNN that Kelly had been aggressive because she was hormonal . Trump has since denied that he was insinuating she was menstruating during the debate.

Even as the billionaire remained unapologetic – “She should really be apologizing to me,” he told MSNBC on Monday – Clinton joined a chorus of critics from within his own party. At one point, she laughed him off as “having the time of his life, being up on that stage, saying whatever he wants to say”.

“I thought what he said was offensive, and I certainly think it deserves the kind of reaction that it’s getting from so many others,” Clinton said of the remarks about Kelly, before turning to a wider condemnation of her Republican rivals. “But I think if we’re focusing on that we’re making a mistake.”

During her Fox show on Monday night, Kelly said she had “decided not to respond” to Trump’s comments directed at her. “I certainly won’t apologize for doing good journalism,” she said.

At the debate, Kelly also questioned Trump about the tens of thousands of dollars he has donated to the Clinton Foundation. Trump told Kelly he donated the money so that she would attend his wedding.

Clinton scoffed at the idea on Monday, saying she attended the wedding because she “happened to be in Florida and thought it would be entertaining”.

Kentucky senator Rand Paul stepped up his criticism of Trump on Monday as well, telling reporters it was time “somebody stands up and really call nonsense nonsense”.

“If no one stands up to a bully, a bully will keep doing what they’re doing,” Paul said. “Unless someone points out the emperor has no clothes, he’ll continue to strut about.”

Trump’s campaign did not immediately respond to a request for comment about Clinton’s remarks. But he tweeted on Monday that he had been assured by the Fox News chairman, Roger Ailes, that he would be “treated fairly” by the station. Trump appeared on several Sunday morning TV news shows, but not on Fox’s main show. He now is scheduled to appear Tuesday morning on Fox and Friends.

In a statement on Monday evening Ailes described a conversation between them as “blunt but cordial” and said the air had been cleared. “Donald Trump and I spoke today. We discussed our concerns, and I again expressed my confidence in Megyn Kelly,” Ailes said, describing Kelly as “a brilliant journalist” whom he supports “100%”.

Ailes added that he assured Trump “that we will continue to cover this campaign with fairness and balance”.