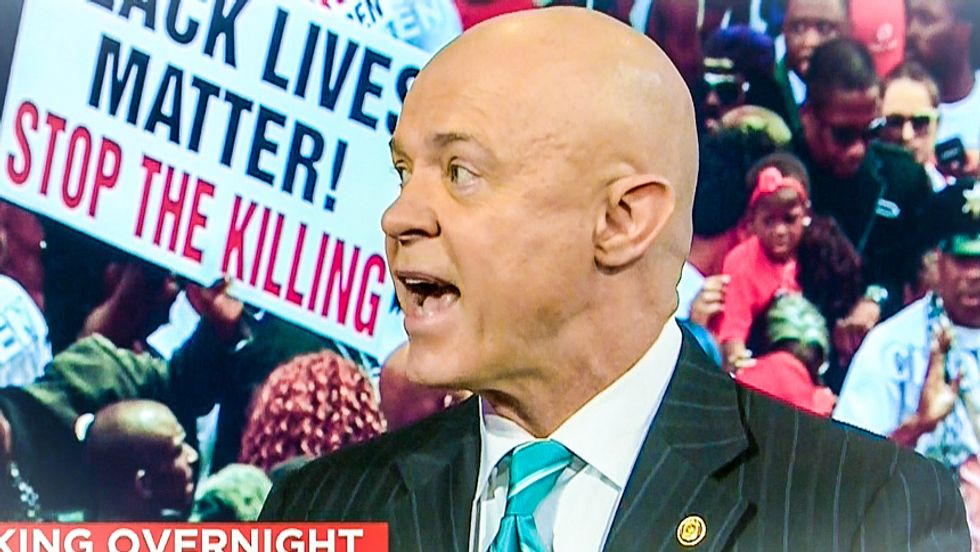 A CNN panel discussion about the latest Black Lives Matter protests and violence in Ferguson turned into a shouting match on Monday after former NYPD Detective Harry Houck tried to defend the killing of Michael Brown, who he called a "criminal."

After several days of peaceful rallies in Ferguson for the anniversary of Brown's death, activist Mo Ivory told CNN host Anna Cabrera she was sad to learn that "some fools" had been involved in gun violence Sunday night.

"Prior to that, it had been so peaceful and it had been refreshing to see that there was a celebration going on, to really celebrate that there has been some movement, to come together and commemorate an incident that was so tragic," Ivory remarked, noting that the media had only reported the police version of events so far.

Houck pointed to a "gun violence problem in Ferguson" to explain the incident.

"Let's not rush to any conclusions that the police officers did anything wrong here," Houck said. "This demonstration had been very peaceful. You're going to have some thugs that might try and disrupt it, might try and start a riot here."

Cabrera wondered if the Ferguson officers were in a "damned if you do, damned if you don't" situation because they would be criticized for using force against suspects.

"I think there is a real reason why police officers' actions are going to be criticized," Ivory pointed out. "There's an awful history of excessive police brutality against African-Americans in Ferguson, and for that matter, across the country."

"So I don't really think from a police officer side it's damned if you do, damned if you don't," she added. "Just don't. Don't use excessive force and then you won't be in that situation."

Turning to Houck, Cabrera asked how police officers should balance restraint with the use of force.

Houck, however, turned the question into a defense of the officer who shot Michael Brown.

"You can look at this incident where Michael Brown was a criminal who tried to kill a police officer and is dead as a result of that," the CNN law enforcement analyst opined before he was interrupted by Ivory.

"Harry, that's a real dramatization of what Michael Brown was!" she exclaimed.

"The facts indicate that!" Houck shouted back.

"A lot of people do not believe that Michael Brown was a criminal," Ivory insisted.

"I know the facts don't matter to you, Madam," Houck yelled. "But that is a fact!"

Cabrera reminded Houck that the Justice Department had accused the Ferguson police department of discriminating against black residents, even though the officer who shot Brown had been cleared of the shooting.

Houck agreed that the police department had problems, but he warned that appointing black officials was not the solution.

"Where is the money that's supposed to be coming from these politicians so that the police officers can have the resources to be able to utilize them in this city so that they can put more cops on the street?" he said. "You know, the issue here isn't that we need a black police chief or we need a black judge and all of the sudden things are going to be fine. It doesn't matter, just as long as somebody is doing the correct job."

As the segment concluded, Ivory reminded Houck that racism in the Ferguson police department had nothing to do with a lack of resources.

"Let's not say it was because of resources," she quipped.